ITA A1: Serie A1: Trento the first finalist!

After two quite tied semifinal matches, Itas Diatec Trentino conquered two important victories over Andreoli Latina that brought them to the Final of the Italian championship. 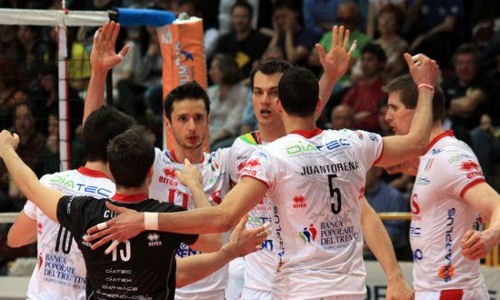 The team from Trento won the access to the Final of Serie A1 like last season and the season before, and every year since 2007/2008. The current Italian Champion this year had to face a big surprise of the semifinals – Andreoli Latina.

“Nobody believed we could come so far” – said after the second match Jose Rivera. “But this means we are strong, stronger every year” – added Puerto Rican spiker.

And they were! But in two meetings with Trento they showed it only at the beginning of the games. Both matches had similar stories. Tied fight in the first set, won eventually by Trento, that is an expert in fighting out the endings, then two sets under the domination of the Champions associated with too many errors made by Latina in important moments.

But the experts agreed that in this year’s semifinals Trento did not show its strongest game and the whole potential. Everybody has always great expectations of the level of their game and this year something was missing. However, Radostin Stoytchev calms: “It was not our best game, we had moments of doubt, but in the V-Day we have to be ready physically, tactically and, above all, mentally. We will do our best”.

In the second duel (Macerata and Cuneo) there is a tie 1-1, the match on April, 18th will decide which team will join Trento in the Final.