Tonight, Energy T.I. Diatec TRENTINO will be hosting Sir Safety PERUGIA for the third and last round in the semis of the Italian league. This match will be special in its own way for Emanuele Birarelli as the middle blocker will celebrate 340 caps with the team of TRENTINO, an all-time record. 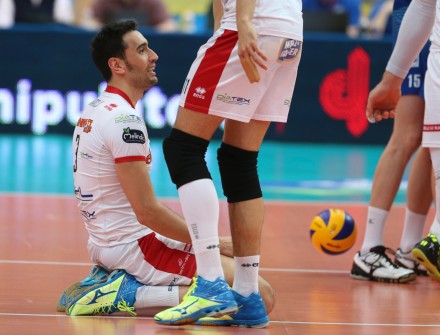 Trento will surpass the record set by the former libero of TRENTINO, Andrea Bari, who played 339 matches for this team from 2006 through 2013. Birarelli, who was also the most prolific blocker in this year’s European Cups, has scored as many as 2,501 points wearing the shirt of TRENTINO.

“This record is something that was particularly dear to me but there is none who deserves to break it more than Birarelli,” explains Andrea Bari, who is a close friend of the middle blocker as they went to the same school and spent some time together also on the national team of Italy.

“His record will be hard to beat but I wish him to improve it even further this season,” Bari adds, as this would mean TRENTINO would make it to the Championship series with MODENA.

Birarelli, on the other hand, is looking forward to the re-match with PERUGIA after losing round 2 on Tuesday night:

“We have to stay calm and be cool-headed, and this way we will be able to exploit the home advantage that we got after topping the charts in the regular season,” he says.