A great player returned to Piacenza. Maurizio Latelli is back in Copra Volley after ten years. 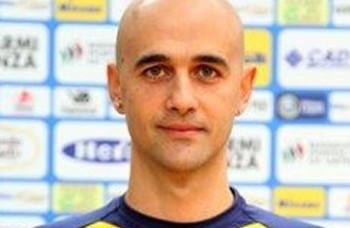 Latelli as an athlete has multifunctional value: up to 26 years has only played as a setter before moving to the role of libero. He played the setter in the 2010-2011 season when in Verona, as a substitute for Meoni.

“This return to the red and white shirt fills me with pride” Latelli says, “and there are two very specific reasons for being so proud of this: one is my personal point of view, the second the spors point of view”.

“From the sports point of view once more I became a part of a team that is ambitious, and to do it at 38, is a great joy because it means that I did something good in my career, at this age, it is like putting the icing on the cake. The personal reason is quite different from the sports one: in this period of crisis, with all the problems that the sports clubs are facing and with colleagues who are in a search for a team, I can consider myself very lucky and happy to be part of a team this year that still has big ambitions. This is a return to a team dear to me, where I was accepted at the dawn of my career, it is a great honor: with Copra I played the first year in A1, in that season we played everything. To return now to a team that has grown and gained and maintained a space both domestically and internationally, is a dream and a great privilege.“

Latelli will play in Copra Elior Piacenza inthe next year and probably will keep his dual role as setter/libero.