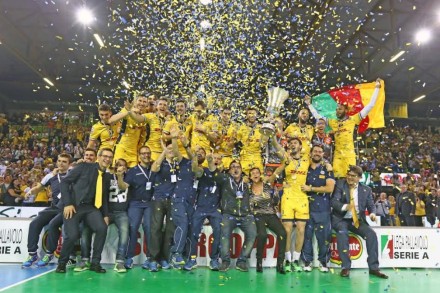 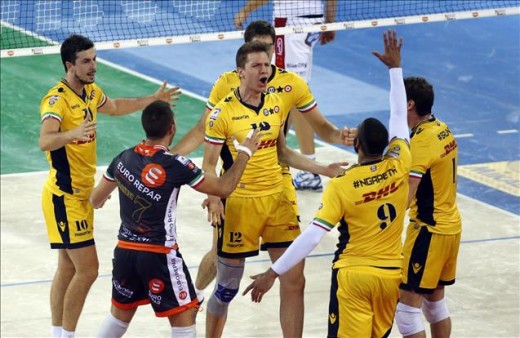 What we could say about the first set except – OUTSTANDING! Despite Modena‘s lead during the whole first set, Trentino managed to stay in the game and to save the first set point of the rival (24:24)! Then, the audience had an opportunity to see amazing volleyball!

Modena and Trentino missed six set points each, but Djuric has managed to use counter attack and to finish amazing first set (37-35). We saw some amazing moves, like Ngapeth’s “bagger” spike, Bruninho stunning move and Djuric’s incredible reactions…

But, Modena didn’t want to surrender! They started playing even much better in the second set! Again, they were leading all the time and Ngapeth clinched this part of the match with a stunning spike, 25-23!

The new set again went to Lorenzetti’s side! Again, they were leading in the third set, Trentino have even managed to save one set point (23:24) but Vettori scored in another attack and brought lead to his team in sets 2:1!

Defending champions of Italian Serie A1 Trentino wanted to play tie-break and they done it! They were the team who were leading all the time and managed to take the set 25:23!

It seemed that Trentino didn’t have enough power to face mighty Modena! At the result 6:6, Modena made 4-0 scoring run and a few minutes later managed to keep the advantage and to win the trophy!

Luca Vettori was the most dominant player with 32 point, while Earvin Ngapeth added 16. On the other side, Mitar Tzourits scored 29 points, Oleg Antonov added 22!