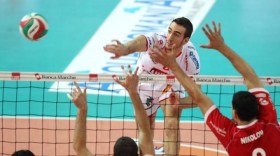 Macerata came away from a packed arena in San Giustino with a 3-1 victory although the host gave it a good fight as Patak made his debut.

MVP: Parodi. Fefè De Giorgi (coach Energy Resources San Giustino): “I am satisfied because I have seen the team play good volleyball and I’d like the players to do more of this, because if we can get read of a few silly mistakes, we could really do well. I like the impact of Patak on the game. Now we know who we are, our season starts now”.

Cristian Savani (Lube Banca Marche Macerata): “All the games are difficult, and this one was no different. We stepped up after losing the set. They had an excellent performance from the American Patak, he is a top player”.