Modena defeated Trentino in the Italian Cup finals and clinched the prestigious trophy for the 12th time in club's history! 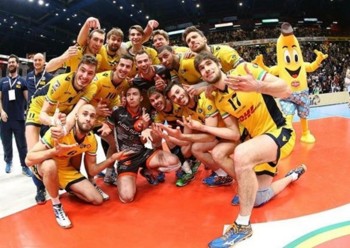 The Cup is painted in yellow! For the second year in a row and for the 12th time in the history of this competition!

Modena were simply superior in the big finals against Trentino and the final score proves it – 3-0! Perhaps, we had all expected a bit more thrilling game, but the Yellow crew played a perfect match. They were amazing in defense, imaginative in offense. Most importantly, they were always in the right place at the right time. On the other side, it was just obvious that Trentino players were quite tired after that tie-break marathon against Lube in the semifinals.

Both in the first and in the second set, Modena would gain the crucial lead somewhere around the 16th point. They would escape to 2-3 points margin and then performed a routine finishing. The third and the final set was completely one-sided. The Ywllow crew made a big margin already at the start and then cruised toward winning the trophy.

The top scorer was the one the MVP of the big finals – Luca Vettori. Italian opposite made 19 points, Earvin Ngapeth aded 16, while Lucas Saatkamp collected 11.