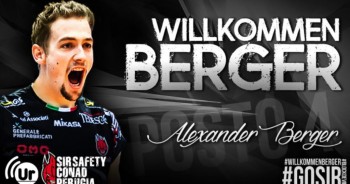 Alexander Berger will continue career in Sir Safety Perugia!!! The Italian powerhouse announced this transfer on its official website!

Berger is the captain of the Austrian volleyball team. He has played for Hypo Tirol Innsbruck for years, while he spent the last two seasons abroad. In 2014/13 season he was in France, playing for Nantes, while in 2014/15 he moved to Italy where and became one of the best players of Padova.

His excellent performances haven’t passed unnoticed, so Sir Safety Perugia offered him a contract. He accepted it immediately.

“I am thrilled! When I received a call from Perugia I did not hesitate to say YES, because it is one of the top teams in Italy. Perugia have a very strong team and a very passionate crowd, so I am proud to be part of this club,” said Berger for the official website of Sir Safety Perugia.

POL M: Kubiak – “I want gold medal in Rio. Any other result would be a failure”

BREAKING: The first case of Zika virus in volleyball?!