The 2012 is the best year for the Italian man’s volleyball since some time. At first, the descendants of the ancient Romans won the Olympic bronze medal, then the Italian juniors won the European Championship title. However, it seems they do not want to stop. There are indications that the best receiver in the world Osmany Juantorena will play in the Italian national team in April. 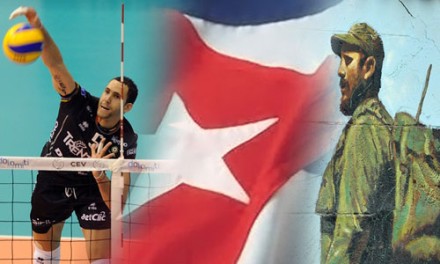 Osmany Juantorena is considered as one of the best volleyball player in the world, who has a fantastic achievements on the club area. Despite the fact, his career is extremely colorful not lacking in the gray and even black. In 2006, the Cuban was suspended by his native federation due to alleged use of prohibited pharmaceuticals. Obviously, it was an official reason for the punishment created by the Fidel Castro’s regime, but in fact, it was only an excuse in order to rein Juantorena up on ‘the Hot Island’.

Juantorena appeared on the court 3 years later when Diego Mosna (Trentino Volley’s president) set him free from toxic effects of the Cuban Federation. After that his career began to flourish and paint a rosy picture. What is more, the color can be changed to a different color of paradise – azure.

According to the Italian press, Juantorena may come out in the ‘la squadra azzurra’ in April. Mauro Berruto, a coach of the Italian National team, will looking for a new concepts and tactical solutions before the consecutive season and one of them is an appointment sent to the Cuban with the Italian passport. Juantorena has already expressed his desire to play in the Italian national team before the Olympic Games, however, Berruto did not make up his mind to take Trentino’s player to London, so it seem the international fate of Juantorena is on Berruto’s hands.

One thing is obvious. If Juantorena receives the appointment, Itally will be the most international (cosmopolitan) national team in sport not involving football (soccer), because there are players from all over the Europe. Michal Lasko was born in Poland, Dragan Travica in Croatia, Ivan Zaytsev was born in Italy, but he is the son of the legendary USSR setter and Jiri Kovar, who is a Czech, but he got an Italian citizenship.

Nevertheless, Osmany Juantorena is the outstanding player and as befits a great personality, he has a large number of supporters, but opponents as well. No matter what decision he will take, some people will praise him and others criticize. Hence, the supporters of Juantorena need to hope that he will soon sing the following words of Toto Cutugno’s song – Sono un Italiano, l’Italiano vero. While Juantorena’s opponents have to rely on the ancient Mayan prophecies will come true, and the world will end on the 21st of December, so Osmany will not manage to make his debut for the Italian National team.