Something odd is happening with Pomì Casalmaggiore players this season as they suffered the fourth defeat in five games of an Italian Women’s Volleyball Championship - Serie A1. 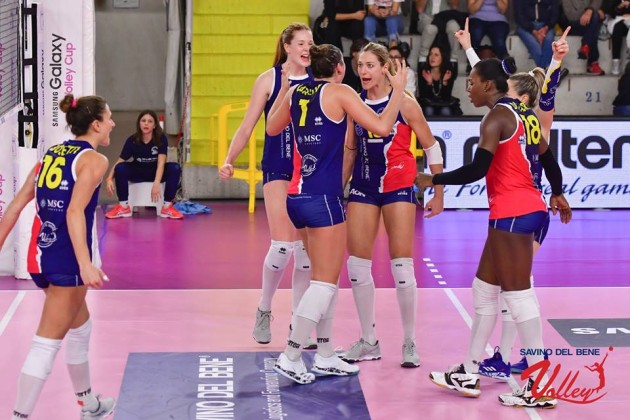 A squad that is projected to fight for the title, just like in the last several seasons, simply cannot get a grip in the 2017/18. Casalmaggiore lost 3-0 (27-25, 25-23, 25-13) to the newcomers myCicero Pesaro. It was Casalmaggiore’s third defeat in front of own crowd this season, in the gymnasium that used to be a stronghold in the days that are not so far away. The Belgian Lise van Hecke topped Pesaro with 17 points which were the same amount of points that the Canadian Sarah Pavan poured down on the other side.

Savino Del Bene Scandicci continued with an outstanding campaign. They reached 5 of 5 by outclassing Lardini Filottrano, finishing their fourth game without losing a single set and remained leaders in the rankings. The Swedish prospect Isabelle Haak had another astonishing display for Scandicci, scoring 22 points. The Pole Berenika Tomsia noted 11 for Filottrano.

Unet E-Work Busto Arsizio are doing a great job in Serie A1 this season as they notched the fourth win. They defeated Saugella Team Monza on the road in four sets thanks to 20 points from an American Michelle Bartsch. The Czech Helena Havelková made 19 points for the losing side.