The city of Brno will play host this weekend to two tournaments whereby tickets will be assigned to make it to the final round of the 2013 CEV Youth Volleyball European Championship – Boys and Girls coming up later this March and April. Read latest volleyball news on Worldofvolley.com. 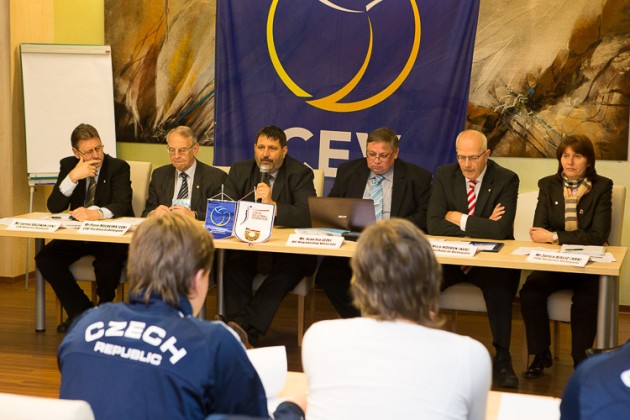 A total of 10 teams – five per gender – will compete at “Vodova” sports hall for what is certainly likely to turn into the international debut for most of these young players.

On Wednesday the traditional technical meeting was organized at “Vista” hotel with CEV Technical Delegates Pierre Mulheims and Nico Hoeben in attendance, together with the Vice President of the Czech Volleyball Federation, Robert Urbanek. Mr. Mulheims wished all the best for the New Year to all people in attendance and stressed that Brno is well ready to play host to yet another international competition. The local organizing committee chaired by CVF Secretary General Ivan Iro was introduced to the various delegations and everything is set for a few days whereby Europe’s next generation of Volleyball stars will showcase their skills and talent.

The competition is set to start on Thursday afternoon with the game starring the girls from Latvia and Hungary, whose debut will be followed by the clash whereby the boys from Germany will test out the likes of Belarus. The home heroines of the Czech Republic will then open their campaign by playing Portugal while the program of the first day is rounded out by the local guys who will be playing France.

Spiker, where is your shoe? (VIDEO)