The Bosnian team of Jedinstvo BRCKO claimed this weekend the inaugural edition of the Balkan Men’s Regional League that came to a close in Tirana after four stops in as many countries. This and other volleyball news read on Worldofvolley.com. 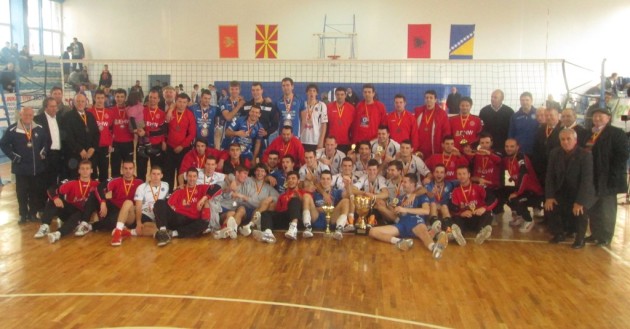 The competition was joined – apart from the winning team from Bosnia & Herzegovina – also by Buducnost PODGORICA (Montenegro), Studenti TIRANA (Albania) and Shkendija TETOVO (F.Y.Republic of Macedonia) with every club organizing a home round played with the round robin format.

This adventure got started this past December in Montenegro’s capital city and the continued in Tetovo and Brcko before coming to a close this weekend in Tirana. The last round played could eventually determine the final standings of the competition with provisional leader Buducnost losing to Jedinstvo so that the side from Bosnia & Herzegovina ultimately seized the trophy.

The last round was held at “Fahrie Hoti” sports hall in Tirana with Jedinstvo and Buducnost that claimed their first couple of matches to go for what was a much anticipated final showdown on Sunday. Jedinstvo edged Buducnost 3-1 to celebrate their victory in the inaugural edition of this competition while the home heroes of Studenti TIRANA beat Shkendija TETOVO in straight sets to settle for third place. Many fans showed up throughout the weekend in Tirana to enjoy some great Volleyball matches as well as the final awards ceremony with the event turning also into a huge success in terms of media exposure.

Mr. Leonard Tase, Slobodan Kovacevic and Zoran Karanovic, i.e. the Secretary General of the Albanian, Montenegrin and FYROM Volleyball Federations, were all in attendance for the awards ceremony thereby showing their intention to strengthen their collaboration for the good of the sport in the Balkan area. After the very positive outcome resulting from this test, the organizers stated plans are already being worked out in order to establish a Balkan Volleyball league.