Noliko MAASEIK and Knack ROESELARE will be crossing once again their ways in the Championship series of Belgium’s national league. With Knack having already topped the charts of the Playoffs, Noliko advanced to the last act of the competition after claiming a dramatic game with the real sensation of the season, Prefaxis MENEN. 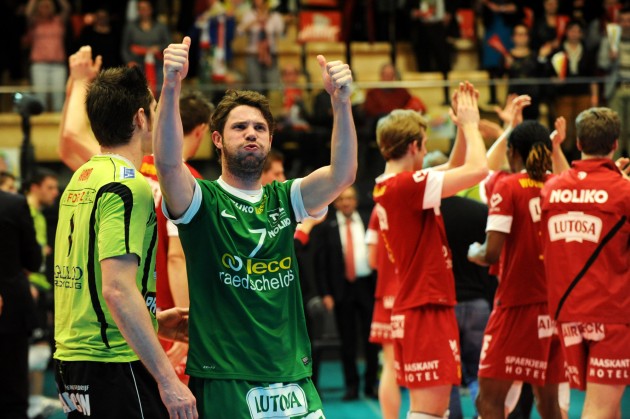 In what was the most anticipated game of the Playoffs, Noliko and Prefaxis – mentored by the former head coach of France’s BEAUVAIS Oise and Euphony ASSE-LENNIK, Alain Dardenne – contributed a world-class game as 2,400 fans were in attendance at Lotto Dôme. Prefaxis MENEN started out with the right pace by seizing the opening set (25-23) and did set the tone also for most of the second, going up 24:20 before – powered by their always great fans – the home guys of Noliko stormed back to make it 1:1 (29-27). After this terrific final rush, last year’s champions looked more confident as if they had got rid of some pressure and they literally dominated the scene in the third set for a massive 25-14. However, Prefaxis did put up a good fight also in the fourth set but Noliko eventually prevailed bringing it home with the score of 25-22 for the final 3:1.

“This is a happy end of very dramatic Playoffs” libero Bert Derkoningen says. “We have got rid of all the stress and pressure because the qualification to next year’s CEV Volleyball Champions League is extremely important for our club. We all look forward to the Championship series with Knack; even though our archrivals seem to have the right edge this year, we’ll fight until the end to retain our title”.

Noliko qualifies for the final act of the national league for the 20th consecutive season and the Championship series – to be played with the format “best of five” – is set to start this coming April 3 with Knack enjoying the home advantage after topping the charts of the Playoffs.