Czech Republic could celebrate their first win in the tournament by edging Croatia 3:1 after 118 minutes of play. Croatia’s Uglješa Vujović topped the scorers’ chart with 25 points, while Michal Finger and Petr Sulista scored 18 apiece for the winning side. Read more volleyball news on worldofvolley.com. 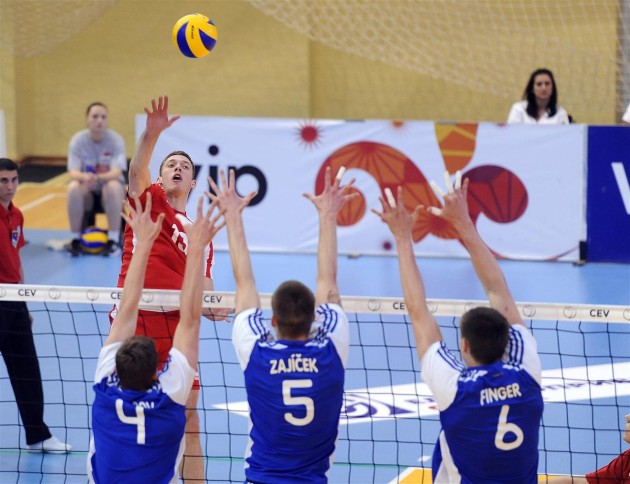 Croatia started with a different line-up in comparison with the previous matches. However, the newcomers played very well and Croatia was in front for the most time in the first set. Croatia led 20:14, and they even reached a set point at 24:20, but the persistent Czech team would not let go. They won 5 points in a row and completely turned the score in their favor (25:24). Even though they didn’t make the most of the first set ball, ultimately they ended the set at 27-25 to take the lead in the match.

In the second set the Czech Republic got off to an early 8:3, and completely controlled the game all the way until 16:13 at the second technical time-out. After the break, Croatia started to be more aggressive, and they came to close the gap to just one point (15:16). However, the Czechs would not allow any surprises, getting away quickly to a comfortable lead (20:15). Once again Croatia reacted and narrowed the gap to 19:20. In the finishing stage, the Czech Republic was more focused and wrapped up the second set at 25-23, mainly thanks to powerful serves by Petr Sulista.

In the beginning of the third set Croatia reacted with an early 5:2 lead. They successfully maintained the gap through the middle stage of the set, when the Czechs reached the tie at 14:14. After a great battle in the remainder of the set, Croatia edged their rivals 25-23 for 1:2 overall.

In the fourth set Croatia started by taking an early 7:4 lead, but the Czech Republic soon reached the tie at 11:11. At the second technical break the scoreboard showed 16:13 for the Czech side. They maintained a 3-point advantage, and by the end of the set the lead was further extended (24:19). Croatia tried to fight back after scoring 4 points in a row, but Michal Finger ended their hopes with a powerful spike for the final 25-23 and 3:1 in sets.

Petr Juda, head coach of the Czech Republic: “We had some ups and downs in this match. When we reach the last and deciding stage of the set we struggle to finish it and that is something we must work on”.

Pavel Bartos, setter in the Czech team: “Today we played better than Croatia and we deserved this victory”.

Milorad Krunić, head coach of Croatia: “We knew that the Czechs are a good team. The first two rounds they played with Spain and Serbia, so their record in the standings wasn’t reflecting their actual potential. I rested some key players in this match because I wanted to have them fresh in the last two matches. Maybe we could have done more with them playing, but it was my decision and I believe that it was the right choice”.

Uglješa Vujović, Croatia’s opposite: “We showed that we are capable of competing with the strongest teams in this tournament. Today we played with the second line-up and we performed very well. This team has potential and we will continue to improve, I am sure”.