Tichele Solis was one of three players to score in double-digits as little known Belize made a winning start to the second round of the 2014 FIVB Women’s World Championship NORCECA Pool J, outplaying Antigua& Barbuda in four sets (25-11, 18-25, 25-17, 25-13) in one hour, 26 minutes. Read latest volleyball news on Worldofvolley.com. 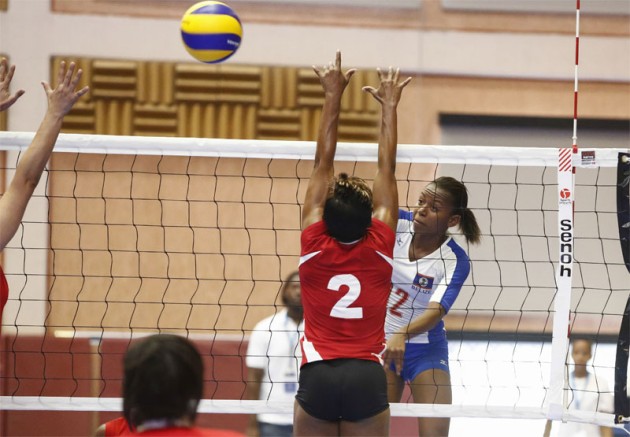 It was a dominant effort by Belize which outscored its opponent on spikes 38-20; blocks 8-6 and service aces, 13-5, all backed up by setter, Tanesha Encalada, who accounted for 24 of the team’s 25 perfect sets.

Solis led the way for the Central Americans with 17 points, while Shantell Arnold tallied 15, including five blocks and four aces, and captain Sherylee Young-Thornton, 12. For Antigua & Barbuda, Naheemah Wilson was the lone player to reach double-figures with 11 points.

Commenting on her Antigua & Barbuda team’s performance, Giselle Azar said she was pleased with the effort of her team-mates despite the loss.

“We made a few bad passes that cost us in the end but all-in-all I think the team played well”, Azar said. “I must also say congratulations to Belize for giving us a good fight and we now have to go back to the drawing board and work harder for our next match.”

Young-Thornton said her team’s intention was to come out and play with a lot of energy from the first point and even though it may have worked against them in the second set by giving its opponent with easy points, the final result was what mattered most.

She also praised her team’s serving effort which she said was a key in setting up a lot of easy points.

“We knew we had to serve well and our girls did just that and we are very happy for the win and looking forward to improving on our little mistakes for the second match,” she said.

Antigua & Barbuda coach, Esron Gittens pointed out that coming into the match his team wasn’t aware of how tall some of the Belize middle players were and most of their plays were centered on them.

Gittens added, “The service game of Belize caught us by surprise as well it had us in some trouble and if you don’t receive well and pass you cannot create points for yourself, so we have to do better in that department.”

An elated Allan Sharp, coach of Belize was full of praise for his team’s serving which he said was a key to the win.

“We knew Antigua & Barbuda was missing a few key players so we wanted to put them under pressure from early and we managed to do that”.

“Our level of play fell off somewhat in the second set, but we regrouped and took the next two sets to get the win”.

YEC M: Belgrade is on a roll