They needed five sets but in the end the home heroes of France could cruise past Belgium – bronze medalist from the 2012 European Championship – to qualify for the 2013 FIVB Volleyball Men’s U21 World Championship that is scheduled for late August in Ankara and Izmir, Turkey. Read latest volleyball news on Worldofvolley.com. 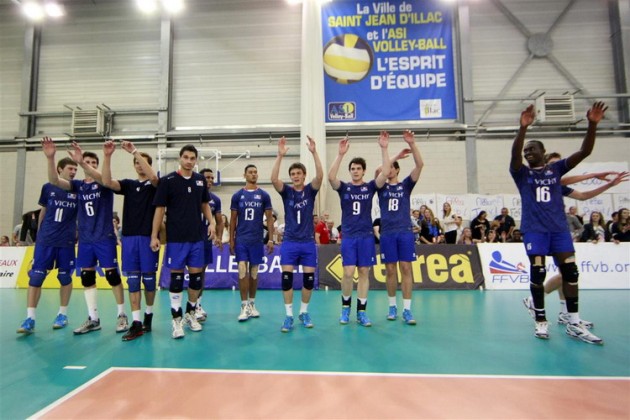 It was the game that everyone had been longing for since the start of the tournament in Saint-Jean d’Illac after these teams had scored three wins in their previous matches.

“We know each other very well and this is going to be a very close game” France’s head coach Stéphane Faure had said on Friday.

However, he was wrong, at least for the first two sets where Belgium caught a great start playing very aggressive and with good consistency. On the other hand, France looked a way too nervous and the home guys helped their opponents by making a total of 25 mistakes (!) in set 1 and 2.

Belgium got off to a flying start also in the third set with France looking faulty but the course of the story suddenly changed by the time the guests were leading 18:12.

“My players probably did think that the game was gone, so they got rid of the pressure and finally played as they are used to” Faure said. “We had nothing more to lose, and with no pressure anymore on our shoulders we could play free”.

As a result of that breakthrough, France won the third and fourth sets and the tie-break was literally one-sided. “Les Bleus” finished it off after 1 hour and 49 minutes to start the celebrations with their relatives and friends. France’s team captain Trévor Clevenot – who grew up in Saint-Jean d’Illac – top scored in the end with 21 points while François Lecat paced Belgium in their losing effort with 25. With this result France’s juniors compensate for their disappointing result from last year as they had failed to make it to the final round of the European Championship and will be one of the sides to follow very closely there in Ankara and Izmir.