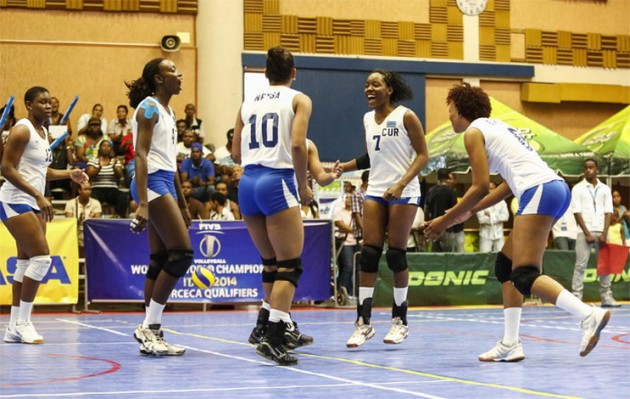 Anthony, who attends the University of North Carolina ended with 13 points, while Grigorius added 11, including four aces and one block. It was an all-round solid display from the hosts who outscored its opponent, 32-23 on spikes, and 11-6 on aces while committing only 18 errors to 28.

St Lucia, which showed great fighting spirit to close to within one point in the third set at 19-18 after trailing 17-7 at one stage had a team-high ten points from Dania Hamilton while Latoya Edward got seven.

Henri Delfina, coach of the victorious Curacao applauded his team for playing to their pre-match plans.

“Going into the match we worked out a game plan for St Lucia and I am very pleased that we were able to execute to perfection and for that I am well satisfied”.

Despite the win, one concern in his team’s play according to Delfina was its lapse in concentration which allowed St Lucia back into the third set.

“It’s something that we tend to do too often when we are in charge of a match, and we definitely need to work on closing out sets,” said Delfina.

A disappointed Florian Combie, coach of St Lucia while not happy about the defeat was upbeat as he looked ahead to the remaining round-robin matches.

Combie said: “Any time you play in the tournament like this you never like to be beaten in your first match because it puts you under pressure for the next two matches in the group”.

“We know the most important thing is to finish among the top two in the group and get to the finals which will guarantee qualification to the next round, so for us we have to get our act together very quickly”.

Maya Gomez, captain of the Curacao women’s team and making a return to international competition after missing last year’s series due to injury said she was satisfied with the effort and how the match was played out.

“I must also credit our players for a great service game which was very instrumental in helping us score a lot of easy points”, added Gomez.

Speaking after the match Natalie Edward, captain of the St Lucia team said “We were too tentative from the start, and our reception game was not up to standard which caused us a lot of points”.

“We have two more group matches and we need to win both to get to the final, so as a team we need to regroup very fast and turn things around”.

BUL M: Who will lead Bulgaria in...