Estonia remains the real sensation of the qualification tournament for the 2013 FIVB Volleyball Men’s U21 World Championship running at “Hristo Botev” sports hall in Sofia. This and other volleyball news read on Worldofvolley.com. 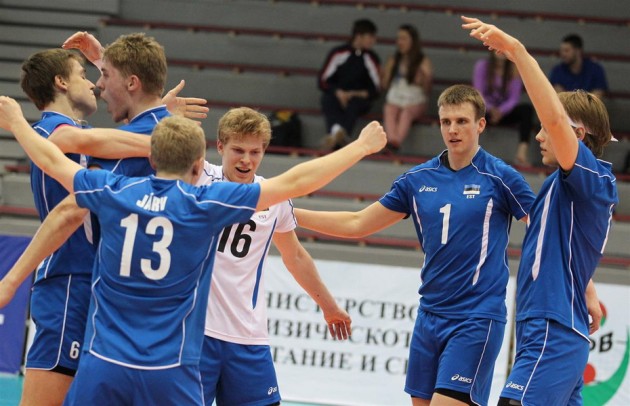 On Saturday the guys in blue jerseys downed Germany in three straight sets (25-21, 25-21, and 25-22) to claim their third consecutive win and stay atop of the charts before they play Israel on Sunday for the last round of action.

Estonia imposed their pace right from the start of the game with Germany (8:4) but the guys around head coach Adrian Pfleghar responded with solid blocks and good serving to level the score at 13 all. Still Estonia got a small lead (16:14) by the second technical time-out and this was slowly but surely widened up to the final 25-20 that was helped by some mistakes of the Germans in defense.

Germany’s mentor asked for his first time-out quite early in the second set as his side trailed 2:4; Estonia got a margin of three (8:5) and did not show any weakness to set the pace of the game with real confidence. Yannick Harms brought Germany back on track for the 18 and 20 all but after that Estonia changed gear by scoring four consecutive points and the provisional 2:0 was there as the guys in blue jerseys cashed their second set ball (25-21).

The real sensation did continue also in the third set with Estonia setting the tempo there all the way through for a 25-22 and 3:0 win to follow up on the major upset they had already caused on Friday by beating the home guys of Bulgaria.