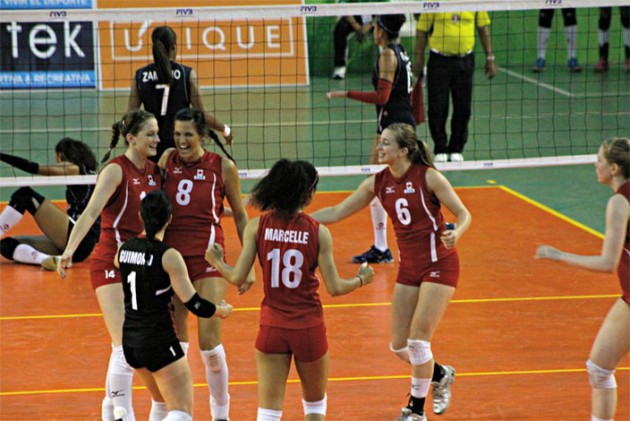 The winners held a 18-7 margin in the blocking category to mark the key difference in the tough duel. The home team had the slight edge in aces (7-6) and made fewer mistakes 25-32.

Margaret Barclay was the offensive leader of the Canadian side with 18 points while Kyla Richey and Jaimie Thiebault added 12 and 10 respectively.

Peruvian Karla Ortiz led her side with 18 points and Raffaela Camet followed with 16. Yulissa Zamudio and Diana Soto chipped in with 11 and 10.

“We have played two five-set matches and today we added the victory, however we have a young cast who is struggling with the heat and humidity of this city,” said Arnd Ludwig, the coach of Canada.

Brittney Page, captain of the winning side said they were over anxious about this match.

“We knew it would be very difficult because the Peruvians are the local team and after that we had in our debut against Cuba, we looked to move forward with this battle,” she said.

Peru coach, Korean Sung Hong, said: “We missed a lot in the reception and therefore in the last moments could not use more game variations. Hope everything goes better against Cuba“.

While Mirtha Uribe, Peru captain said they had no more spare parts to maintain the result, after tying the game in the fourth set. “We have to Clarivett Yllescas still recovering and we lost the concentration at key moments, but the good thing is that we keep adding up, due to the rating system of this tournament.”