The Netherlands remained composed playing against hosts Korea as they nailed a 3-1 victory in Pool C of the FIVB World League Intercontinental Round at the Yugwansoon Gym on Sunday. Jeon Kwang-In, Seo Jae-Duck, Jelte Maan and Jeroen Rauwerdink had a good game. 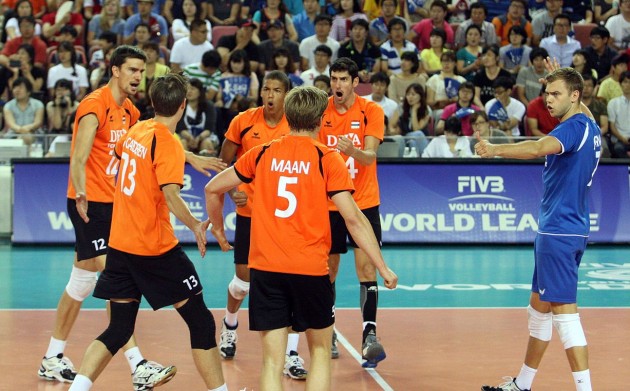 The Dutch attackers and blockers dominated the game in first and second sets. The Korean players trailed with the team-play and defence, but could not match the Dutch players’ height and power. Jeon Kwang-In and Seo Jae-Duck combined for 26 points, but lost 19 points on errors.

Overall, the Netherlands‘ team play was better than their opponent – scoring 43 points on attack and limiting their errors to just 11 faults.

The Koreans were in an energetic mood when they took the advantage of 18-17 in the second set but Niels Klapwijk and Thomas Koelewijn‘s defence proved to be stronger and stopped the Korean surge.

Korea was able to make a run and claimed victory on the third set from Jeon Kwang-In‘s attacking splurge. The momentum continued early in the fourth set for Korea but the Dutch regained the lead and finished-off the match at 25-20.

Live from Sofia: Rouzier for WoV –...