The home heroes of the Czech Republic opened on Friday the last round of action in preliminary Pool B of the 2013 CEV Volleyball European League – Men by edging Hungary 3:1 thereby making another step forward along the way to Marmaris, Turkey, where the final four is scheduled for next weekend. Montenegro defeated Spain in the other match. 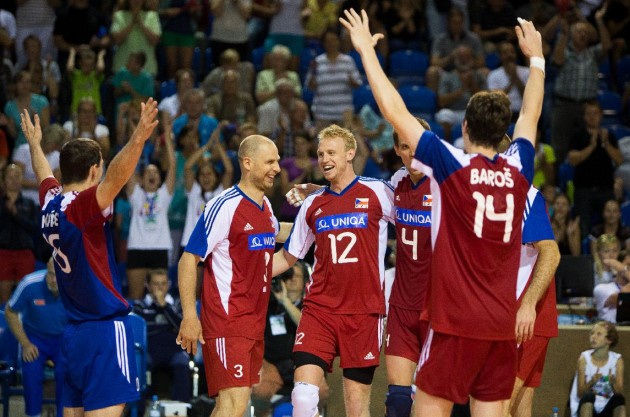 Some 2’200 fans contributed a great atmosphere in Opava for the home debut of the Czechs as the score was pretty tight in the early phases of the opening set (8:8). The Czechs then moved to the front and even though their opponents tried to respond, they still could bring it home at 21-16.

In the second set Hungary pressured the home favorites with their serve and could catch a brilliant start; though they pulled together the Czechs could not compensate for their disastrous start and so Hungary could go for the provisional 1:1 (12-21).

However, in the third and fourth set the home side set the pace of the game right from the beginning and could deservedly cruise to a 3:1 victory with Tomas Hysky top scoring in the end with 18 points.

“The crowd was just amazing tonight and I was surprised that so many came to see us right on the first night” Czech team captain Ondrej Boula said. “We really enjoyed it. Apart from the second set where we lost focus and consistency – something that can happen in this competition – we had the game under control from start until the end.”

“The first set was close but in the end we could pocket it by serving strong. Hungary took many risks in the second set and they were rewarded for this” stresses head coach Stewart Bernard. “However, we still did believe in our chances to go for a victory; my players did perform well and in the end they brought it home.”

“The Czechs played very good in the first set, they served well and we had problems in reception. Things changed in the second where we displayed good serving and defense and we could cash it. However, the Czechs got back on track in the third and fourth set; they played good and we could do nothing to stop their run” Hungary’s team captain Balazs Bagics commented.

In the opening match of the tournament Montenegro beat Spain 3:1 (18-21, 21-17, 23-21, and 21-13) to keep somehow alive their chances to make it to the final four. Spain scored the big points in the end of the first set and could provisionally set the tempo of the game. However, Montenegro started playing with more aggressiveness and consistency right from the start of the second set and that changed the course of the game. Their opposite player Aleksandar Minic killed a couple of spikes to finish the third set at 23-21 and then everything went easy for Montenegro in set 4.

“We wanted to catch a good start and after losing the first set we were extra motivated and played with glowing hearts” says Montenegro’s team captain Aleksandar Milivojevic. “We are happy for we did start the tournament the best we could.”

“We did fight and showed great team spirit, so I am happy with our performance today” adds head coach Nikola Matijasevic. “Our technique is sometimes not that good but we have got a physical advantage for we are taller than the Spaniards and we always believed in our chances to win.”

“After a good start where we attacked and received pretty well our performance lacked quality and consistency so I am disappointed with today’s result” says Spain’s head coach Fernando Muñoz.

“We did not play that good today. We made too many mistakes in serving and we are absolutely disappointed” stresses Spain’s team captain Jorge Fernandez.