Belgium stretched their amazing winning series in the prelims of the 2013 CEV Volleyball European League – Men to 11 consecutive matches after edging Austria in straight sets on the second day of action in Nitra, the Slovak city that is hosting this weekend the last round of play in prelim Pool A. In the other match of the day the hosts of Slovakia continued to display good form as they bested Denmark in four sets. 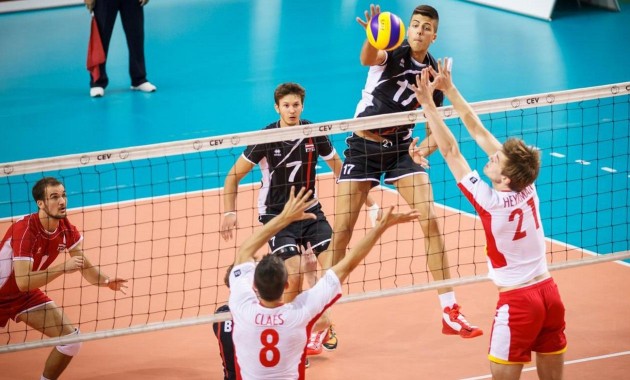 Belgium comfortably controlled their game with Austria with the only exception being a close first set that was cashed with the score of 23-21. Matthijs Verhanneman top scored for the winning side with 10 points while Austria’s opposite Thomas Zass registered 14.

“I had warned my players and told them that today’s game was going to be much more difficult than our fixture with Denmark on Thursday” says head coach Dominique Baeyens. “In the previous games we always had difficulties with Austria especially in the first set. We served really well from the start up to the end and I am evidently happy with our eleventh victory in the competition. We know that on Saturday we will have a tough game with Slovakia and since this is our last match before the finals we will play with full energy and see what happens” he continues.

“It was like yesterday. We made too many mistakes and this killed us” stresses Austrian mentor Michael Warm. “We had our chances but we made mistakes in the key moments. Though this is the fourth consecutive week of play we’re still in good shape but mentally we are tired and the quality of our play is therefore going down. Tomorrow we will finish by playing Denmark; we have beaten them only once this season but I hope we will complete our campaign in the European League with a good result.”

In the other match of the day Slovakia beat Denmark 3:1 starting out strong and claiming the first set with a terrific 21-10. However, even though they played without their opposite Mads Ditlevsen, Denmark responded well and seized the second set (21-19) to make it 1:1. The hosts did not lose composure and easily controlled the remainder of the game paced by Milan Bencz who in the end registered 17 points. Youngster Peter Trolle Bonnesen top scored for Denmark with 11.

“We started good but then we fell asleep in the second set and this is something that should not happen” says Slovak mentor Stefan Chrtiansky. “I made some changes in our starting six so that our second lines could enjoy the opportunity to play and I am happy with what they did. Tomorrow we want to win against Belgium so as to finish our campaign in the European League on a high note.”

“The teams starring in this group are very good and Slovakia has got many good players. They served well tonight and did a good job also in defense and blocking, pressuring our receivers and hitters. It was a good test for us to see where we stand. We will try to perform our best against Austria on Saturday. We made some changes in our starting six for some players are tired after four weeks and needed some rest. On the other hand I could test some other players and this was good” concludes Danish mentor Fred Sturm.