Brazil came back from a set behind for the second day in a row to beat Bulgaria in their FIVB World League fixture on Saturday. Leandro Vissotto and Tsvetan Sokolov were the top scorers. For more latest volleyball news visit worldofvolley.com 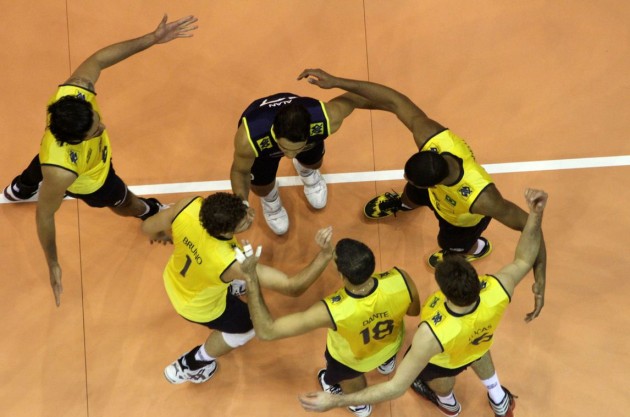 Just as they had on Friday, Bulgaria committed fewer errors in set one, and with a powerful attack and a solid defence, jumped five points ahead to 10-5. Lucas Saatkamp’s great serve put Brazil back in the game (11-12), but the Europeans regrouped and won the set 25-19.

Ricardo Lucarelli and Leandro Vissotto came into the match in set two, equaling the power of Bulgaria’s Tsvetan Sokolov and Todor Aleksiev. A run of Lucarelli points took Brazil up to 18-14, and a Vissotto spike sealed the second set, 25-21, to make it 1-1.

Brazil had a great start in set three, scoring five points in a row to run up to 6-1. They also improved their defence, and a great serve from Lucarelli sealed the set (25-17).

Encouraged by the crowd, Brazil then gained a five-point advantage in the fourth set. Vissotto, Lucarelli and Lucas Saatkamp led the attacks to close out the set (25-19) and win the match.

Leandro Vissotto was the match’s top scorer with 18 points, while Tsvetan Sokolov was top scorer for Bulgaria with 14 points.

Brazil stay top of pool A with 19 points, and are close to qualifying for the final stages in Mar del Plata, Argentina. Bulgaria remain second in pool A, with 14 points.