The Girls’ U18 team from Algeria flew to Thailand on Tuesday to participate in the 2013 FIVB U18 World Championship due to start in Nakhon Ratchasima, Thailand on Friday, July 26th until August 4th. 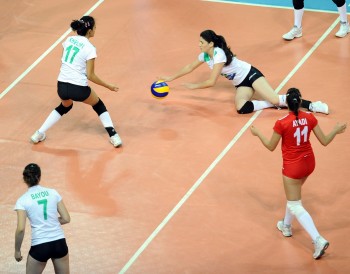 It will be the third historic participation for the Algerian girls in this age category after Lisbon (Portugal) in 1991 and Ankara (Turkey) in 2011.

The North Africans, led by the duo Rabia Kamel–Naïma Belabbes, qualified for the elite event after earning bronze at the Girls’ U18 African Nations Championship in Cairo last March after Egypt won gold and Tunisia, silver.

Team captain and setter, Selma Benmansour, is considered one of the big stars expected to make her mark on the international scene after she was awarded ‘Best Setter’ at the African qualifiers.

Algeria started their campaign against Slovenia on July 26th, before their match against Brazil on July 27th. They will then take on the Dominican Republic on July 28th before closing the first round against the United States on the 30th.