Fast-improving Peru, became an impossible nut to crack for Slovenia as the world No.10 knocked the counterparts out in straight sets 25-19 25-14 25-21in their last 16-team playoff in the Girls’ U18 World Championship at the Liptapanlop Hall. 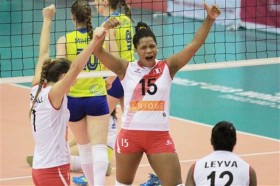 Peru, which performed superbly to stun world No.3 Italy in their group stage, remained in brilliant form in this match against Slovenia, world No.33.

Hard-hitting Rosa Vaaliente and star spiker Angela Leyva led the Peru’s explosive attacks in the first set, which Slovenia tried to play cool under pressure. However, despite giving it all out, Slovenia found it rather difficult to match the well-established Peruvians to go down in the close opener 19-25.

Holding a 1-0 advantage, Peru remained uncatchable in the second set. They jumped to an initial 5-0 lead before widening the gap to 10-1 and 22-12, thanks to Leyva’s outstanding talent and the team’s consistent play. Peru allowed the rivals only two more points to wrap up the one-sided set 25-14.

Peru took command initially in the third set, which they led 5-2. Slovenia regained their composure and heightened their defence, allowing the rivals difficult attempting opportunities. As Slovenia narrowed the margin 19-23, the Peruvians poured everything to win this match. Their greater determination paid its dividends when Peru won the thrilling set 25-21, the match and a quarter-final ticket.

To read more from this competition, click on Youth World Championship 2013 W.