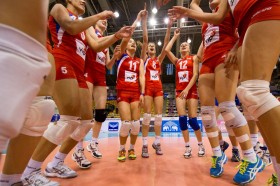 Serbia continued their successful run of victories to qualify to the quarterfinal and meet Peru in a great fight on Friday. Greece will play for 9 to 16 positions against Slovenia.

Despite their victory, the Serbians lost the record of being the only team who didn’t drop a set when they lost the third one against Slovenia.

Again Serbia’s sharp spiker Tijana Boskovic headed the match scorers with 23 points after a marvelous performance aiding her team to continue their dreams to the title followed by Sara Lozo 14 points. Anthi Vasilantonaki led the Greek scorers along with captain Olga Strantzali with 12 points each.

The Serbian team made a big success through their dominance at the net actions specially the blockers who were a difficulty to penetrate.