The Netherlands scored their first victory at the Pool F tournament in Belgrade beating the debutants of the competition Algeria in straight sets (25-15, 25-7, 25-6). 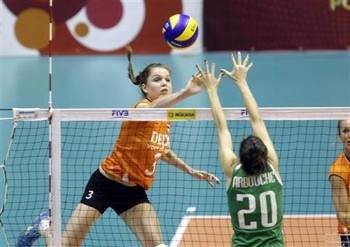 Robin de Kruijf of Netherlands was the star of the match with 16 points, including 8 blocks.

Like the previous two matches, Algeria could not create any problems to their rivals. Only in the first set they managed to score 15 points against the inspired Dutch team, but the following two were simply embarrassing as the African side scored a total of 13 points in sets 2 and 3 combined.

The Dutch girls entered the court eager to compete, and they were pushing very hard during the whole match. Algeria could not respond to such an inspired Dutch game, and often made unnecessary mistakes. They struggled to score and thru the mid-stage of the match they completely lost confidence. A total number of 28 points scored in the match depicts it in the best possible way.