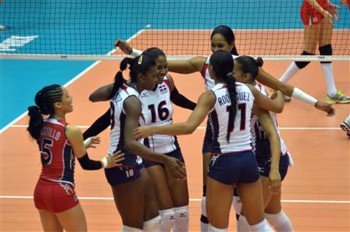 Dominican Republic ends their participation on the Pool G with a record of 2-1 same as Bulgaria.

The first set showed a lot of technical plays from both teams.  Bulgaria’s triple block help them to battle with a consistent Dominican Republic team that take advantage of 20-18 obligating Bulgarian head coach, Marcello Abbondanza, to call a time out. A block of Dominican Jeoselyna Rodriguez extended the lead of the Dominican Republic to 24-21 Priscilla Rivera later end the set 22-25 with a spike against the block.

For the second set, Bulgaria started with a slowly and very erratic receiving line. They rearrange their plays to level the match to a 1-1 after taking the set with an effective attack from Elitsa Vasileva for the 25-18.

The first half of the breath taking fourth set was dominated by Bulgaria when Dobriana Rabadshieva scored the 16-12. The Dominican Republic responded back and returned to tie at 16. The biggest rally of the game began at the latest points where both teams interchange the leading set point. A block from setter Emiliya Nikolova sealed the fourth set 30-28 to extend the game to a fifth set.

The final and decisive fifth set bring the best of both teams that fought till an impressive block from Candida Arias stop Bulgarian Dobriana Rabadshieva to achieve the 14-16.