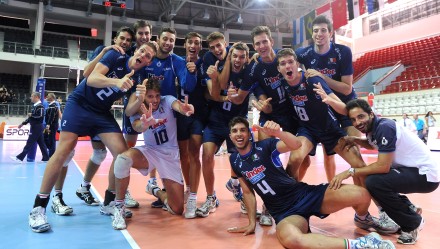 With the victory the Italian team who were fourth in their preliminary pool D qualifies to the quarterfinal, while Serbia who lead their corresponding pool C will play for the 9 to 16 positions.

Among other main causes for the win, the brilliant performance of the Italian opposite Luigi Randazzo comes as the main factor as he was the match scorer with 28 points including 5 impressive dying blocks and 5 ace services. He was followed by the emerging outside hitter Ferdinando Della Volpe who scored 20 points.

From the Serbian side Uros Kovacevic led the scorers with 19 points.

Serbia started the match in their utmost performance as they started with a wide lead using the mistakes in reception committed by the Italian team. Serbia’s big gun Uros Kovacevic hammered the Italians with his spikes to allow them to have a comfortable point deficit till they won the set 25-21.

Italia came back aggressively starting from the second set as their main improvement was in reception and blocking as they succeeded to overwhelm the net action. Italy’s setter Pierpaolo Partenio made a lot of development in the general attacking power for his team through the skills of his opposite Luigi Randazzo to attack the Serbian team from all the net positions beside outside hitter Ferdinando Della Volpe who also helped his team to draw 1-1 before they led again in the third set using the disturbed reception from the Serbian team. Randazzo was amazing in scoring the crucial points allowing his team to win the third set 25-21.

The fourth set was the most exciting as Italy maintain their leading throughout the set with their proper spike and floating services. The Italian blocker specially captain Edoardo Picco did a great role till Italy had the match point at 24-22.

Serbia fought bravely using their attacker Kovacevic and the brilliant performance of the setter Aleksa to come back and save 5 match points in the most exciting part of the match to win the set 30-28 and extend the match to tiebreak.

It was strange that the motivated Serbian team after winning the crucial fourth set to come down 0-9 in the tiebreak after bad reception to the floating Italian service. Italian team motivations increased and they succeeded to win the set widely 15-5 and the match 3-2

GP F6: Masayoshi Manabe – “Our work after Sendai round paid off”