As they are counting the days for their home debut coming up on Friday in Odense, the hosts of the VELUX EuroVolley 2013, Denmark, played Finland this past Saturday and eventually lost that game in straight sets (16-25, 15-25, and 19-25). The teams even played a fourth set which was also taken by Finland after a close final rush (21-25). 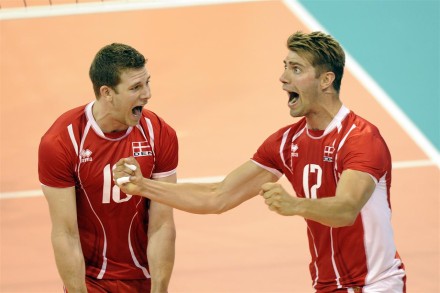 Another friendly game is scheduled for Monday before Denmark plays 2012 Olympic bronze medallists Italy on Friday. “These games represent our last opportunity to see where we stand shortly before the start of the European Championship” says the CEO of the Danish Volleyball Federation, Mikael Trolle. Finland is indeed a very good opponent for the guys coached by former international star Tuomas Sammelvuo have competed in this year’s World League and are set to stay in Herning, venue of these friendlies, to play there Serbia, Slovenia, and the Netherlands in prelim Pool C. These matches will also provide head coach Fred Sturm with the last insights in order to determine the 14 players retained for the VELUX EuroVolley.

Sammelvuo stopped playing this past season and was named head coach of the “Suomis”; he’s got the knowledge and expertise to mentor the group and try to improve on what Finland achieved two years ago as it made the 1/4 finals losing there to Italy.  Denmark got to test the likes of Finland’s 34-year old setter Mikko Esko who has played in some of the most competitive national leagues in the world and is known for his fast balls. Tuomas Sammelvuo was pretty happy with the outcome of the first friendly match with Denmark: “I am satisfied, of course. We played four sets and we have won each of them. I have seen my guys very concentrated and determined, they played sticking to the plans we had agreed upon. I have seen a very good attitude and this is what we shall keep for the start of the European Championship in a few days”.