Vakifbank Istanbul claimed their 51th consecutive win by sweeping China’s Guangdong Evergrande in Saturday’s first semi-final clash at 2013 FIVB Women’s Club World Champs in Zurich, Switzerland. Giovanni Guidetti’s squad overpowered the Asian champions in straight sets 28-26, 25-15, 25-20. In Sunday’s gold medal match, the Turks will take on the winner of Volero Zurich versus Unilever Volei from Brazil. Ting Zhu was the best scorer of the match with 18 points. Istanbul’s Jovana Brakocevic booked 16 kills for her side. Vakifbank kept the upper hand in blocking (8-6) and serving (5-1). 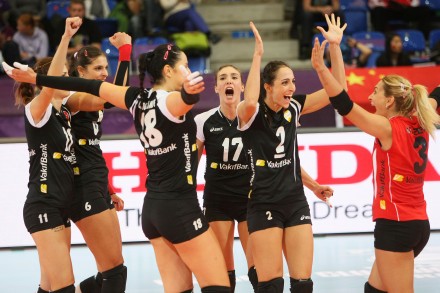 Ting Zhu got in a couple of good shots as Guangdong Evergrande moved into an 8-5 lead at the first technical timeout. The Chinese, who have not had their best day versus Volero on Thursday, kick started into the semi-final duel, putting a lot of pressure on the Turkish spikers. Guidetti’s squad managed to rally back to 13-13, but China kept the upper hand until 16-14. Setter Jingsi Shen repeatedly counted on her fast middle blockers and powerful wing spikers Ting Zhu and captain Ruoqi Hui. However, a Christiane Fürst block kill and a diagonal winner from super star Jovana Brakocevic turned the tables at 20-19. It was a roller coaster set with both teams displaying fantastic volleyball in Zurich’s Saalsporthalle. At 27-26, Brakocevic seized the third chance for the set win as she hammered the Mikasa down to make it 28-26 and 1:0 for Turkey.

Vakifbank Istanbul kept momentum early in the second period, sending their shocked opponents 8-2 into the first technical timeout. The Chinese had lost their focus, acting with less determination and precision. On the other side, the Turks showed great technical discipline. At the second technical break, Istanbul had already extended their lead to six points. It was a one-way game now with the Europeans moving the scoreboard progressively forward. Brakocevic brought up set ball at 24-15 before a Güldeniz ace ended the second set 25-15 in Vakifbank’s favour.

China regained momentum early in the third set. A 12-7 lead was – however – not good enough to pull through. Turkey bounced back to 17-17 and retook command in the crucial phase of the set. Especially the Turkish block-defense system worked regular as Swiss clockwork in that stage of the match. Brakocevic and her teammates rushed to a 22-20 lead and never looked back until 25-20.