This Saturday began the semifinals of the playoffs for the title of Men's Volleyball Super League with the match between Caja 3 Volleyball Teruel and Cajasol Juvasa. 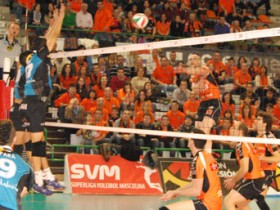 In the first set Teruel was intractable, with great intensity in the playing and a few errors.

Cajasol could not do much to change the big difference in result, and Teruel won the first set with 25:13.

In the second set Cajasol got better, forgetting about the failure in the previous one.

However, Teruel was better at the end and closed the set with 25:21.

In the final set Teruel was leading at the beginning with of 4 to 5 points. To the second technical timeout the difference in the result was 16:7. Although Cajasol tried hard, it could not manage to change the score and Teruel won the set with 25:14.

On Sunday, March 18. will be played the second match of the playoff semifinals.

CEV CUP M: MONZA is not afraid of away match in Moscow