Tel Aviv, Israel, March 21, 2012. More than a thousand people joined the gala whereby Israel celebrated the 80 years since Volleyball was first introduced in the country. It was a very special reunion, hosted by the harbor of Tel Aviv, where quite many players, coaches, referees – sometimes the same person having combined all these positions throughout his/her career – got together to recall the history of Volleyball in Israel. 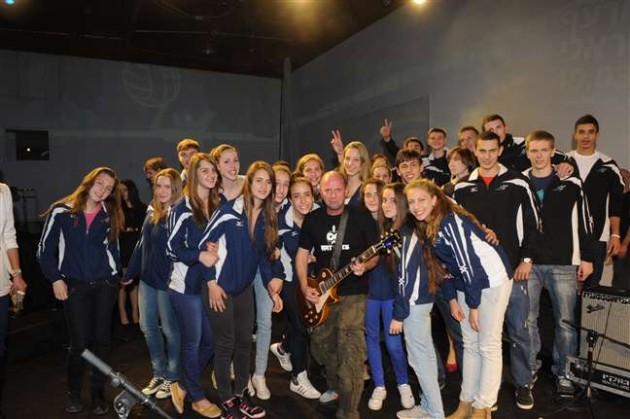 Since Volleyball was introduced back in the early ‘30s, the development of the sport has somehow portrayed also the social changes of the Israeli society.

Volleyball was initially practiced only by amateurs who used it as a stretching exercise after spending their days working in the fields.

On the other side, the team spirit associated to Volleyball did perfectly match the ideology of the pioneers, those who created the state of Israel after settling down there. The approach was made more professional via the contribution of Micha Shamban, who almost single-handedly created the first national teams and educated the first generation of Volleyball coaches and players.

A life-time achievement was presented by the Israeli Volleyball Association to Shamban for the terrific role he played in developing the sport. Quite significantly Mr. Shamban received this award directly from the second generation of players coming out of the Youth Volleyball Academy (see picture).

The official celebrations were opened by Mr. Jacob Shtofman, the President of the Israeli Volleyball Association, who read out a special message sent by FIVB President Jizhong Wei.

Afterwards Mr. Shtofman briefly summed up the history of Volleyball in the country whose climax remains the establishment of a Youth Volleyball Academy with the purpose of growing the next generation of Volleyball players.

Supported by a 3D multimedia presentation, various generations of players and coaches shared their memories related to victories, hard work and training camps. The speakers included the President of the Israeli Olympic Committee, Mr. Zvi Varshaviak, the Head of the Sports Commission, Dr. Shefer, and Dr. Arie Selinger, the most decorated Israeli Volleyball coach in history.

The Secretary General of the Israeli Volleyball Association, Yaniv Noyman, rounded out that special evening, being joined on the scene by the members of all national teams for another very touching moment.

Some facts and figures: with a population of 7.5 million, Israel registers some 5’000 Volleyball players distributed across a total of 450 teams.

ITA W: Semifinals and final of championship on Raisport