Humenne became Slovakia's volleyball capital for the weekend. The best four teams from each gender gathered in the Eastern Slovakian city to play in the 2014 Slovakian Cup Final Four tournaments. Home heroes Chemes HUMENNE won the trophy in the men`s competition and Doprastav BRATISLAVA took the honor on the women's side. 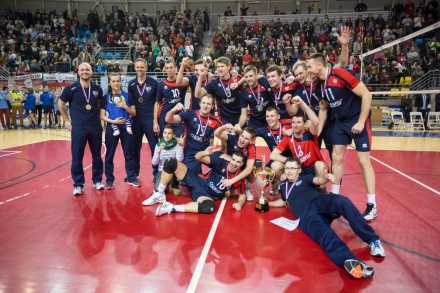 Both final matches on Sunday were played in front of sold out stands and in a great atmosphere created by the crowd.  “It was a real volleyball fiesta in Humenne. The local organizers did great job putting this together and I would like to thank them,” Slovak Volleyball Federation president Lubor Halanda said.

Doprastav was better during the match, but Slavia fought until the last ball. Slavia was down two sets and 18-24 in the third, but they turned the score to 25-24.Eventually Doprastav won this dramatic set by 29-27 to triumph with the cup. “I want to thank my girls for this victory. They did a great job in the practice sessions during the whole week and they deserved this trophy,” Doprastav head coach Tomas Varga said.

“We lost the final for the cup, but the season is not over and we have to pursue our goals in the league,” his Slavia counterpart Martin Hancik stated. Monika Stankovianska from Doprastav became the best scorer of the match with 19 points.

The fans were very happy and heavily celebrated the success with their heroes. “We knew that Mirad was dangerous, but we played very concentrated from the start and especially our performance in attack was great. At last we won a trophy at home,” head coach Richard Vlkolinsky stated.

“We did not play as well as we did yesterday. Chemes was simply better and deserved the victory.  Anyway, it is a success for my young team to play in the final and we are happy for the silver medal,” Luboslav Salata, head coach of Mirad, added. Chemes`s Polish opposite Mikolaj Sarnecku was the best scorer of the match with 17 points.

Libero can score points too! (VIDEO)