ALB: Studenti and Teuta to battle for Albania’s national crown

Studenti TIRANA and Teuta DURRES are the finalists of this year’s Albanian men’s national league for what is actually a remake of last season’s finals. The Championship series will be played with the formula “best of five” and having finished the regular season on top of the charts Studenti will enjoy the privilege to play more games at home than their opponents. Last year this was finally not a real advantage as these sides played extremely well all of their away matches and the Championship title was assigned only after the fifth, deciding game. 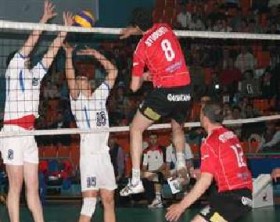 In the semis that were recently completed Studenti scored a couple of wins against Vllaznia, by first claiming the home match 3:1 and then continuing its march by downing its opponents in three, straight sets in Shkoder.

In the other semifinal Teuta routed twice, always in straight sets, the guys of Tirana TIRANA.

The finals will be played every three days alternatively in Tirana and Durres and are expected to prolong the great rivalry that dates back to last year where Teuta eventually seized the title.

As for the women’s national league the grid of the semifinals is determined with Tirana and Teuta having already pre-qualified for that stage of the competition that are joined by Minatori – which downed Skenderbeu twice and always in straight sets in the 1/4 finals – and UMB Volley that also scored a couple of wins – once with a 3:0 and then 3:1 – to claim the derby of the capital city with Partizani.

The semis are scheduled to start this coming April 7 with the first round of matches.

Why Do We Train?