She finished the last three seasons with championship titles from three different countries and then she said "it is enough." 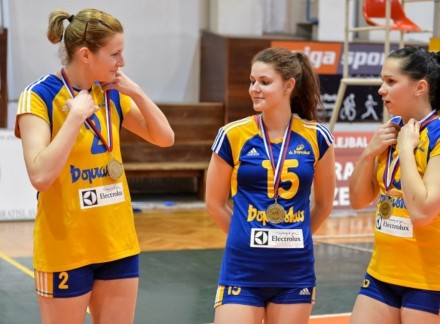 Former Slovakian national team middle-blocker Lucia Hatinova was a key member of the team of Doprastav BRATISLAVA  which claimed its third title in Slovakia’s Extraliga in history and the first one from her native country for Hatinova.
The last match against the archrivals from  Slavia Ekonomicka Univerzita BRATISLAVA was emotional for the player with 78 caps in Slovakian jersey.
“I have decided that this will be my last season.  It was my plan to finish at the age of 30.  We won the league, which was my first title in my home country, so I cannot be any happier,” an elated Hatinova stated.

Last season she won Germany’s national title with SCHWERINER SC and the year before she triumphed as champion of Austria with SVS Post SCHWECHAT.  Since 2008 the 1.89-cm-tall middle blocker has been a regular participant in the European Cups reaching the playoffs of the 2013 CEV Volleyball Champions League with SCHWERINER.  In her career, Lucia also won the national cup of Romania in 2010, the national cup of Germany in 2013 and the national cup of Slovakia in 2014.
Volleyball is from now only history for the player born in Bratislava.  For now she has no plans to come back as a coach or manager, but “you never know,” as Hatinova somewhat enigmatically adds.