Only six days after taking the national league, Studenti TIRANA completed an already memorable season by seizing the trophy of Albania’s national cup once again besting the archrivals of Teuta DURRES, this time with the score of 3:1. With this result Studenti TIRANA sweeps all domestic competitions scheduled for the 2011/2012 season while Teuta could not exploit the advantage of playing the last stage of the national cup in front of their home fans at “Ramazan Njala” sports hall in Durres. 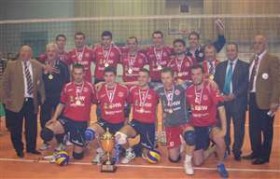 Saturday’s semifinals had turned into an easy affair for Studenti and Teuta as they downed there in straight sets Vllaznia SHKODER and Tirana TIRANA respectively.

The last act of the national cup was the tenth confrontation starring Studenti and Teuta since the start of the year, with four matches dating back to the regular season and five more to the Playoffs of the national league.

Coming out well motivated from their success in the national league, the guys of Studenti TIRANA opened the game with a great pace comfortably claiming set 1 and 2 (25-18 and 25-17) but they slowed down a bit in the third set, committing some errors there, and re-opening the way for a possible comeback of Teuta (21-25).

However, this did not fully materialize as Studenti got back momentum to finish the game in four sets (25-21) and claim Albania’s national cup for the thirteenth time in their history.

As for the women’s national league, the Championship series starring Minatori and UMB Volley stands at 1:1 after the reigning champions of Minatori claimed the first game (3:1) before suffering a setback in the second clash, where UMB Volley scored a speedy win in straight sets.

With the series being played with the format “best of five”, the third game is scheduled for tomorrow in Rreshen, the hometown of Minatori.

When referee is gentleman (VIDEO)