Belgium began their first ever FIVB Volleyball World League campaign in the right fashion as they defeated Australia in straight sets (30-28, 25-19, 25-21) in Kortijk. 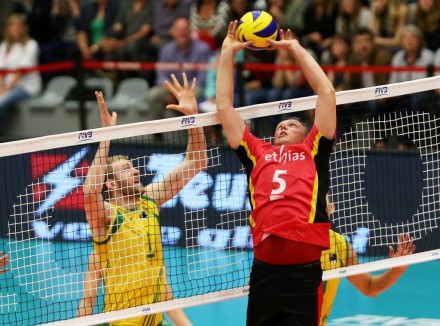 Bram Van Den Dries topped the scores for the hosts with 15 points as he led his side to an historic result.

Australia led the first set early and they forged a 16-19 lead. But strong attacks from Sam Deroo and services from Frank Depestele brought Belgium back within touching distance. The thrilling frame eventually concluded when Van den Dries attacked to edge the opener.

Australia, returning to the World League for the first time in 15 years, bounced back in the second set, keeping the scores tight up until 11-10. But Van den Dries and captain Frank Depestele proved the difference as they helped Belgium surge ahead 16-11 before tying up the set 25-19.

Belgium’s dominance seemed to wain at the beginning of the third set as Australia’s replacements helped the visitors gain a 15-11 advantage. However Matthijs Verhanneman’s contribution in attack helped Belgium edge an historic first victory in front of an emphatic home crowd.