Cuba handled Puerto Rico 25-20, 25-18, 25-18 to begin their NORCECA Men’s Continental Olympic Qualification Tournament on Monday at the Walter Pyramid in Long Beach, Calif. The winner of the eight-team tournament earns a spot into the 2012 Olympic Games volleyball competition. 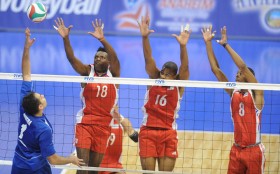 Cuba dominated the net with a 14-4 block advantage and limited its errors to 11.

“We have a young team and at the beginning of the tournament they are a little nervous,” Cuba Coach Orlando Samuels Blackwood said. “Puerto Rico is missing some very important players. I think both teams could have played better tonight.

“For us, it’s been a few rough months since we lost our starting opposite, our starting setter and I was injured just before we left,” Puerto Rico captain Victor Rivera said. “I thought we played the first 10 points well. Cuba is a very young team. We are older. They have a lot of energy.”

NORCECA M: USA Too Much for Trinidad & Tobago

IRN M: Kolakovic –“Being the coach of...