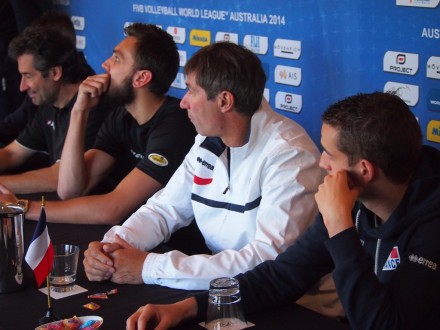 French captain Benjamin Toniutti said: “We know that every game against Belgium is very hard. We’ve lost our last three games against Belgium, but every game is a new game, so we are hoping to win tomorrow and then play in the final. It is the first time I’ve been to Australia so I’m happy to be here.”

French coach Laurent Tillie said: “It was our main goal at the start of World League, to make the final four. I think we deserve it. After a while we are like washing, we don’t know where we are, what time it is, but it’s a great competition. We tried to work hard to find the spirit. At the start of the season we had trouble with three of our bigger players being injured, but we got through and we try and improve every day.”

Belgium captain Hendrik Tuerlinckx said: “It’s a new experience for us. We were really happy to qualify for the World League, I think we deserve to be here, and we proved that by finishing first in our pool. Now we will see what we can do.”

Belgium coach Dominique Baeyens said: “We have had rotations in our team. Our goal was to reach the final four, but we also tried to find a balance to prepare a team for the World Championships but also get some results in the World League. [Frank] Depestelle is not so young anymore, so it would be stupid for him to play all summer. But don’t forget we didn’t bring him to Australia before, and we won both games.”

Dutch captain Dick Kooy said: “We didn’t qualify for the World Championships, so we can fully focus on this weekend. We’ve changed some players, we are very young, our median age is about 22 so it’s great to be here. We did our usual video preparation, but it doesn’t matter who’s on the other side, we’ll just play our game and see how it goes.”

Dutch coach Edwin Benne said: “I’m actually very interested to know where we are against Australia tomorrow. I have no idea, I’m pretty sure Australia is well prepared for this tournament. We only found out on Sunday night that we were flying to Australia, but still, we are prepared. It is very important for us, this is our last event for us this summer. We also didn’t qualify for the European Championships, so we are a bit frustrated, so this is a chance to prove where we are. We want to prove that we are a good team.”

Australian coach Jon Uriarte added: “It has been a tough process to learn what it takes to play World League. The team is coping, it’s learning and its getting better, but we are on our way to rebuild a team after the Olympic Games.”

Australian captain Aidan Zingel said: “It’s been an incredible journey this year, we are so grateful to have this opportunity to be playing in the World League and to prove what we can do on the World stage. A lot of us have played with or against a lot of the Dutch players. Our insight on them is the same as their insight on us. We performed well last weekend, and took the opportunity to stay relaxed and fresh, and I think it will be the same this week.“

WHAT? He makes perfect set from rival’s...