Trinidad & Tobago captain Nolan Tash said: “Definitely today I felt that the game was a lot more competitive due to the leadership of the Costa Rica captain and his players, we definitely wanted to finish in seventh position. They kept us honest the entire game. On behalf of myself and my team, we are grateful to be here and happy with the hospitality that was shown to us. “ 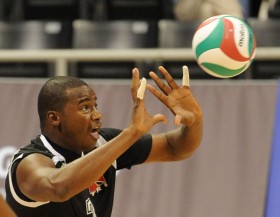 “Realistically speaking, coming into the tournament, we feel like we could have come in at least fifth,” Tash added. “I think we put ourselves in position to do that. But I think the greater experience of the other teams kept us from achieving that goal.”

“Congratulations on a great tournament,” Costa Rica captain Pablo Zumbado said. “It was a very intense tournament for both teams. We both maintained a high level. It was important for us to improve our level in this tournament, which we did.”

“Now we’re ready to take the next step. It’s important to watch the best teams in the world and learn from them. Thank you to the local organization – we have zero complaints and it was a very well-run event” he added.

“Costa Rica is improving and we are improving and NORCECA is improving,” Trinidad & Tobago Coach Gideon Dickson said. “Both teams probably need to play more at this level. We feel that the Costa Ricans play from the heart and they have nothing to lose. That’s why the match went four sets. Our team has grown in this tournament because we had to compete every day. Hopefully the next time we compete, we can beat some of these bigger teams. The Long Beach hosts, to me, was one of the best NORCECA events out there. Thanks to the tournament directors for a well-run tournament.”

“We wanted to win the game,” Costa Rica Coach Cesar Salas said. “We made many tactical adjustments to try to win. It’s of course a shame to have not a won a match and it leaves a sour taste in our mouth But we have learned a tremendous amount from this tournament and from these great teams. It’s a great opportunity to play against Trinidad and like other teams in this tournament. That is something we need to work on. It was a great experience and thank you to NORCECA and Long Beach.”