Columbia and Chile played an outstanding match and the longest until now at the South American Olympic Qualification tournament that ended 3-2 (20-25, 17-25, 25-23, 25-17, 15-8). The team coached by Horacio Dileo coming from behind and after losing the first two sets won a very levelled match with Sebastián Gevert becoming the top scorer with 23 points for Chile while Alexander Moreno scored 19 for the winner. 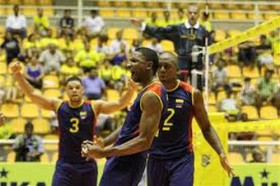 Chile got an incredible advantage from the start thanks to the great output of Sebastián Gevert serving (2-8). The Chilean captain widened the leadership and Horacio Dileo requested his first TTO when the score was 2-12.

Columbia scored two consecutive aces of Jiménez and a better performance of the team but the 2nd. TTO reached with the score 9-16. Two errors serving gave Chile the first set.

Chile kept the leadership on the second set 4-8 and 12-16. A clash of two Argentine coaches, with Chile‘s being Daniel Nejamkin that had in Sebastián Gevert helped by Joaquín Momberg the best players on this set.

Columbia stepped onto the field on the third set decided to change the path of the match and even though two consecutive blockings of Joaquín Momberg gave Chile the lead on the first TTO 7-8 the match kept growing and Columbia found its momentum on the hands of Giménez 16-14. Then, a blocking of Faver Rivas gave them the victory by the minimum difference.

Vicente Parraguirre replaced his brother Matías on the fourth set and very similar to the third set, first Chile got the lead with Columbia forcing a tie-breaker with the good performance of Alexander Moreno and Jaime Viáfara.

The fifth and definitive set started with excitement and both teams giving their utmost but Columbia soon found the way to get the lead and the blocking of Moreno and Sergio Gaitán did the difference.