Japanese coach had many reasons to celebrate today. 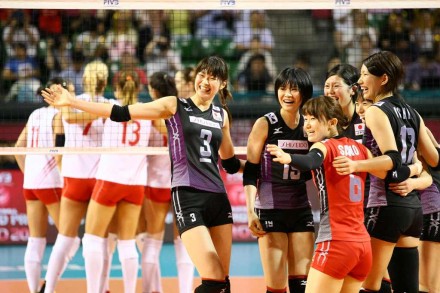 Japanese coach Masayoshi Manabe: Today’s game went just as we had planned in our pre-match meeting. First, we served great and that helped break Turkey’s rhythm, and we blocked their high balls and our defence was good. Everything went according to plan. We didn’t do anything special (on defence) but even everyone on the bench was surprised at how well things went in defence. The players were really concentrating well and it’s probably the best we’ve seen in the past year. Each of the players knew who they had to block, where they should be and who should hit where. We played Turkey in the Preliminary Round’s first game away in Ankara and it was the first game of our new strategy [of playing without a middle blocker], so we were just trying to get the strategy working. Now we’ve won with this strategy, we’re starting to feel that we’re on the right track. But we still have three matches to go this week, against China, Belgium and Brazil, so we’ll have to wait until this is over to see how it’s going.

Coach of Turkey Massimo Barbolini: Congratulations to Mr. Manabe – and happy birthday. And to Japan, who I think played a perfect match. They absolutely deserved to win this match. We had too many problems in all aspects, but I think it came down to what Japan did.
(Re. contrast with win over Brazil): In this Grand Prix in one night everything can change. This was not the Turkey that played (previously) in the Grand Prix. We’ve been playing very good matches, unbelievable matches, but matches like today’s can happen, especially against a team like Japan who don’t forgive anything. I was hoping for a better performance, but this is sport. We have to think about the very good things we are doing. This tournament is important for the experience of understanding what young players can do, and losing matches also helps us to understand these things.
(Re. Japan): Japan have time to get into their rhythm because they are in the Finals [as hosts]. For other teams, they have to get into a rhythm immediately. Playing without a middle blocker may be a strange way, but they had a good result. They need good reception every time and today they had good reception, so congratulations to Japan.

Congratulations to Japan. Shame on us. All we needed to do was to kill the ball against such a low block of Japan, similar to men’s volleyball. However, we have only two killers, Neriman and Gozde. When an opponent serve well, our middle blockers become obsolete in attacks and opponents focus on Neriman or Gozde, whoever is in the front line. That is simple. These girls can not save the team every day, they can be tired. In this squad, we have no answers, other hitters Guldeniz, Seda or Yeliz can not help us. We have to receive very well to activate our middle blockers in attacks, there is no other way against high class teams like Brazil, Russia and fast pace teams like China and Japan.

What does that mean that Japan has time to get rhythm for being the host? If that was true Japan would have won everywhere time they hosted. And when China and Italy hosted the finals they did not win either. Is even harder for the host because they have much more pressure. playing the preliminary round knowing they will be playing the finals at home and must perform well.