European champion Serbia won their second match of the competition with a four-set (16-25, 25-21, 25-13, 25-20) victory over Korea on the third day of action in the FIVB Women's World Olympic Qualifying Tournament at Tokyo Metropolitan Gym on Tuesday. 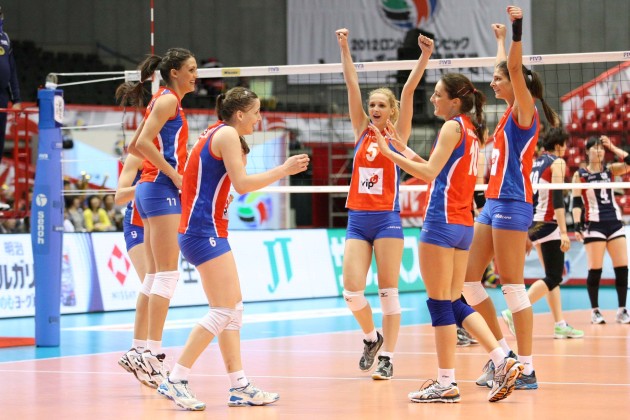 Serbia recovered from the loss to Thailand last Sunday to improve its mark to 2-1. The defeat saw Korea slide to 1-2 in the competition.

Korea looked sharp at the outset, but struggled in the second and third sets against some crafty play from the Europeans. The defeated side battled valiantly in the final set but could not overcome the power of the Serbians who held an 8-2 advantage in service winners.

Korea bolted to a 6-1 lead in the first set behind a pair of spikes from Kim Yeon-Koung. The Koreans led 8-2 at the first TTO and kept the pressure on. Jovana Vesovic hammered a spike to make it 9-4. A reception error on a serve by Hwang saw Korea go up 14-5 and reeling Serbia called timeout. Kim Yeon-Koung‘s spike gave Korea a 10-point advantage at 16-6 at the second TTO. A service ace by Natasa Krsmanovic made it 19-11 and Korea took a timeout. Kim Yeon-Koung soared for a spike down the middle and Korea went ahead 20-11. Milena Rasic sprained her left ankle on the ensuing point and had to be helped from the court. Serbia won an extended rally on a fine block from Brakocevic to make it 20-13. A block by Jung Dae-Young moved Korea within two points of the set at 23-15 and she gave Korea the set 25-16 with a pair of spikes.

A service error by Kim Yeon-Koung put Serbia up 5-4 in the second set. Serbia led 8-7 at the first TTO on a block by Veljkovic. A well-placed dink by Veljkovic made it 9-8 for Serbia. A quick dink by Maja Ognejenovic took the count to 14-11 for Serbia and Korea called time. Serbia led 16-14 at the second TTO following a spike by Veljkovic. Kim Yeon-Koung crushed a pair of spikes to equalize at 16-16. Serbia scored the next three points and Korea took another timeout. A reception error by Lim Hyo-Sook put Serbia up 22-16. Korea finally broke Serbia’s run with a spike by Yang Hyo-Jin for 22-17 and ran off three more points for 22-20. Serbia then called time. Brakocevic drilled a spike to give Serbia set point at 24-20 and took the set on a smash by Vesovic.

Two straight spikes by Kim Yeon-Koung tied it 4-4 in the third set. Serbia moved ahead 6-5 on a dink by Ognjenovic, but Kim Yeon-Koung answered with another spike. Brakocevic’s dink gave Serbia an 8-6 lead at the first TTO. A Serbian spike made it 11-7 and Korea took a timeout. Veljkovic’s spike put Serbia up 14-8 and it was clear that Serbia had taken over momentum in the match. A spike by Brakocevic made it 16-9 for Serbia at the second TTO as they were seemingly scoring at will. Korea took a timeout while trailing 19-10. A net infraction gave Serbia a 20-10 advantage. Kim Yeon-Koung’s spike took the score to 22-11, but only put off the inevitable. A spike by Jung Dae-Young sailed long and gave Serbia set point at 24-11 and they closed it out 25-13 on a Veljkovic spike. Korea took a 6-4 lead in the fourth set on a fine block by Han Song-Yi. A service error by Serbia made it 8-6 at the first TTO. Kim Yeon-Koung’s spike made it 10-8 for Korea and she followed it with a well-placed soft return. A long rally ended with a nice block by Vesovic and evened the score at 14-14. A spike by Han put Korea in front 16-15 at the second TTO. With the score deadlocked at 17-17, Kim Yeon-Koung delivered another spike to put Korea ahead. Serbia moved in front 19-18 on a reception error and Korea called time. Brakocevic’s spike gave Serbia match pints at 24-20 and they finished it 25-20 on a spike by Vesovic.

FLASHBACK: Instead of ace – Direct point...