Eighteen years ago Elena Keldibekova arrived in Peru from her native Kazakhstan to play one season for Club Regatas and to this day she is a happy Peruvian citizen and one of the most admired athletes in a country where women’s volleyball is followed with passion. 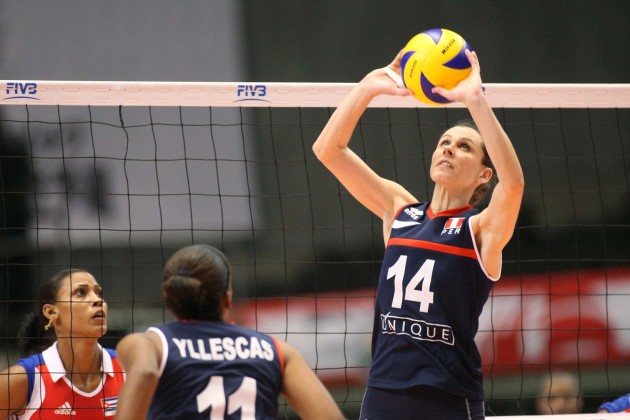 In her last tour with her adoptive national team, Keldibekova, who turns 38 next month, is playing a dual role as the regular setter and also unofficial advisor to the new generation of players she almost doubles in age.

Elena, named the best setter of the Pan American Cup the last two years and also in the 2011 Montreux Volley Masters, once again was asked to represent the national colors for the FIVB World Olympic Qualifying Tournament currently taking place in Tokyo, Japan.

And as it has been the case since 2000 when she represented Peru at the Sydney Olympic Games, Elena had a positive response to the request.

“I talked to the National Federation about including her on our team after she finished her season with Time Volley Matera in Italy”, Coach Luca Cristofani says. “She is in excellent shape and brings experience and stabilization to a team with many young players.”

“She can lead by her example and she can help them to grow as we embark in the process of a new Olympic cycle and hopefully to be among the top eight teams in four years”, the Italian Cristofani added.

While Elena is in a farewell tour that might include the Pan American Cup in early July, she is not ready to call it quits and is planning to play “two or three more years maybe in Italy or perhaps Germany.”

“I am very happy to be able to help the young players to improve the technical part of their game and they also need to learn many things about the tactics”, Keldibekova said after one of Peru’s matches at the Tokyo Metropolitan Gymnasium.

The native of Almaty who has played in the professional leagues of Germany, Azerbaijan and Italy says it has not been easy for the team to make adjustments from the former Asian style of play to the current more inclined to European way under Cristofani.

“I talk to (Alexandra) Muñoz, the young setter, about the mental part of the game and how to cope with different situations”, Keldibekova commented. “It is a long process for a setter but this new generation of players has good talent only that needs to be polished.”

Elena, who speaks in a perfect Spanish and also is fluent in German and Russian, is married to Johnny Westreicher, a former Peruvian player of German ancestry who used to coach the female team of Regatas when she first arrived in Lima and they have a son, Jan, who is an accomplished overall athlete.

“I became in love with Peru, the people, the atmosphere, the weather and of course with Johnny the instant I planted my foot there”, Keldibekova admits. “My parents, my grand-parents and one sister still live in Kazakhstan and last time I visited with them was two years ago.”

Elena is very proud of the early achievements of Jan, 16, who is the junior high-jump champion of Peru with an official personal best of 2.01 meters.

“He plays basketball, handball, athletics and of course volleyball”, she says. “I am very proud of him and I really can’t wait to see him playing for the national team. I think I am going to cry when that day finally arrives.”

When her playing career comes to an end, Elena plans to complete her studies in Physical Education and continue to be linked to sports, something she carries in her blood and is common within her short family.

RUS W: Proton will sign the six-times champion of Ukraine

INTERVIEW: Adams for WoV – “Every day...