Improvement is the ultimate goal for Coach Hugh McCutcheon, whose USA team claimed the title in the last two editions of the FIVB World Grand Prix and took a silver medal at the 2008 Olympic Games in Beijing. 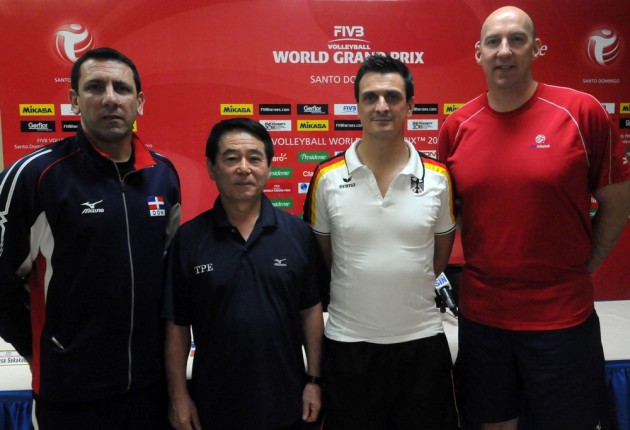 Coaches for the Santo Domingo stage of the World Grand Prix

“Our goal is always to improve and our ultimate target is to win a medal at the Olympics,” McCutcheon stated during the coaches’ press conference ahead of the start of the FIVB World Grand Prix in Santo Domingo.

The New Zealand native also comended the local authorities of the National Federation for the good organization of the event and praised the conditions of the playing facility.

All the tickets for the three days of competition have been sold out and capacity crowds are expected at the venue with a seating capacity slightly over 5,000.

“We will play our hearts to have a good performance here and to put a good volleyball show,” Dominican Republic Coach Marcos Kwiek expressed.

While the European Championship is the goal of Germany‘s coach Giovanni Guidetti, the Chinese Taipei‘s skipper Norimasa Sakakuchi hopes to win a couple of matches during the whole competition.

The four coaches were joined by Cristobal Marte Hoffiz, FIVB first executive vice president and president of NORCECA Confederation, who lauded the quality of the teams and their respective coaches.

“This is a world-class event and we are really satisfied by the support we have received form the media,” he said. “The plan is to have one stage of the World Grand Prix taking place in one of the countries of NORCECA every year.”

Here follows the excerpts of the statements of the coaches ahead of the start of the competition on Friday 8 at 17:00 local time.

Norimasa Sakakuchi (Chinese Taipei): “I really appreciate the opportunity to be in the Grand Prix and this will help to our growth. We will do our best against some very tall and superior teams like United States, Germany and Dominican Republic.Our goal is to win one or two matches during the whole tournament.”

Marcos Kwiek (Dominican Republic): “This is an Olympic year which makes the competiton tougher since I have a lot of players to choose the team for the London Games. One thing for sure is that we will play our hearts to have a good performance here and to put a good volleyball show.”

Giovanni Guidetti (Germany): “It has been very difficult emotionally for us to be here after not qualifying to the Olympic Games. Our next goal is to prepare for the next European Championship and to keep the team motivated for that competition. In the meantime I will include some new players to see how they perform at the high level.”

Hugh McCutcheon (United States): “Our goal is always to improve and our ultimate target is to win a medal at the Olympics. We have twelve players here and 14 that stayed back in Anaheim training hard. We are in the final stage of making decisions and the Grand Prix is a good tool to prepare for the London Games.”