Current Bulgarian title holder Marek Union Ivkoni Dupnitsa is back in the race for the trophy after winning the third match of playoff finals against VC Dobrudzha 07 with 3-1. 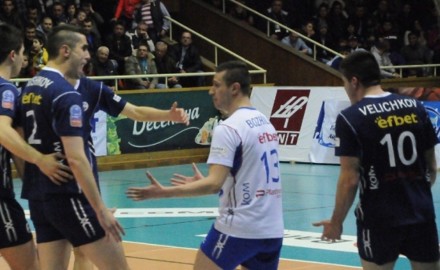 In the crowded hall in Slivnitsa, Dobrudzha started the game well and won the first set with 25-20.

However, the hosts took the important second set with 25-22. Players of Nayden Naydenov won the third part with 25-18 and than broke all chances of Dobrudzha that it might reach the tiebreaker. Marek closed the fourth set with persuasive 25-12.

Despite losing today, Dobrudzha keeps leading in the series, having won the first two games and needs just one more success to become champions.

The fourth match is scheduled for tomorrow and it will also be played in Slivnitsa. If Marek wins, the decisive fifth game on Dobrudzha’s court will decide the team to lift the trophy.

ECH M: Hero of the quarterfinals –...