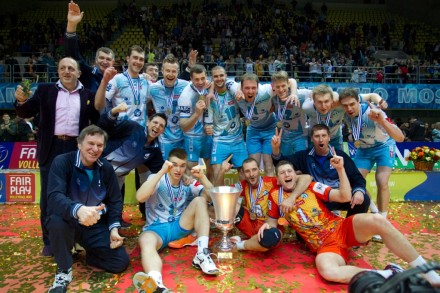 The start of the match was quite equal. Both teams Dinamo and Trentino fought for each ball and after many good points and equalization the host finished the first set 27-25.

The second set belonged to the Italian gigant. They played much better, especially Kaziyski and Lukasz Zygadlo and they finished it 19-25.

In the third period od the game, Trentino took lead from the begining. They even had 19-10 when Radostin Stoytchev tried some other players. At 21-12 for the Italian team Dinamo made mistake in the line up which brought pause of few minutes. Zygadlo won the 22. point for Trentino but on the other side Zaytsev didn’t want to be defeated. Trentino had set point 24-15 but they used the third one which Ivan Zaytsev gave them after the mistake in attack. 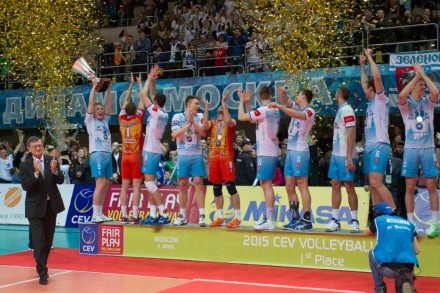 From the start of the fourth set the teams played point by point. After amazing saved by Biryukov, Kruglov won the point for Dinamo who had +2 (12-10) but immediately after Trentino equalized and the teams continued with tight game. With three points in row (blocks of Kruglov), Dinamo went on the second time out with 16-13.

It seemed that they got wings especially Kruglov and Biryukov who led team to 19-15. Although everybody expected that Dinamo will easily finished this set Trentino made turnaround for 20-20. Dinamo had 22-20 and 23-21 when Trentino came to 23-22. Markin made block for set point (24-22) but Kaziyski won the next point and Biryukov made mistake for 24-24. With another mistaek, this time Maxwell Holt result was 24-25 and Lanza won the last point for 24-26 and the golden set.

russian domination, they win it all

If in Poland were paid as much as in Russia, then Russian teams haven’t won anything. $$$

you can only dream