The Pool leaders of Spain needed five sets to edge rookie Denmark (25-16, 25-27, 23-25, 25-17, 15-13) and make sure they will finish on top of the charts with one match, actually the real highlight of the weekend, still coming up on Sunday against last year’s winners and hosts of Slovakia. 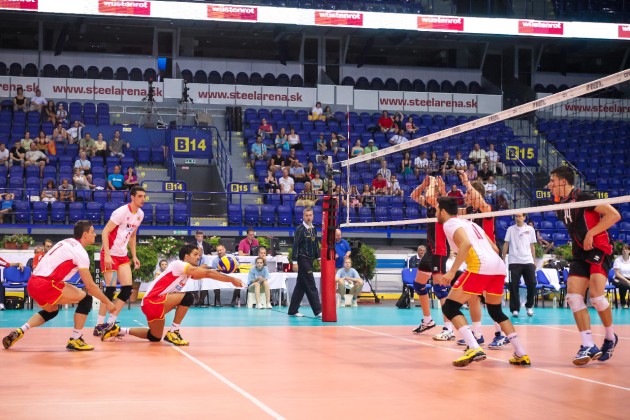 Spain’s head coach Fernando Munoz decided to rest some of his starting players while Denmark played without regular opposite Mads Ditlevsen. Spain dominated the scene in the first set (25-16) but dissipated two set balls in the second with Denmark eventually drawing the count after sealing that affair at 25-27. The rookies of the year did stretch that good momentum also to the third set where Casper Munk Christiansen finished it off with a nice spike for the provisional 1:2 (23-25). After losing on Friday to Israel, Spain did not want to accept a second defeat and got back on track in set 4 (25-17) calling for the tie-break. Denmark was up 8:6 as teams changed sides there but Spain flipped the score around and Rodriguez was the man of the match cashing the first match ball for the final 15-13.

“I used some back-up players today as they also need to get valuable experience in international matches” said Munoz. “I do not know if on Sunday we’ll opt for our best starting six as we play the local heroes of Slovakia because some players are tired or nursing minor injuries”.

“I think the Spanish coach was very clever in opting for some fresh players after their defeat to Israel on Friday and we also did more or less the same. We had a tough time at the beginning but our guys gradually adjusted their play to the style of their opponents. We could have won the tie-break but I am still happy that we came back strongly after clearly losing the first set. This is also a good experience for us” stressed Danish assistant coach Martin Olafsen.

WL M: USA breeze past Korea with 3-0 victory in Gwangju