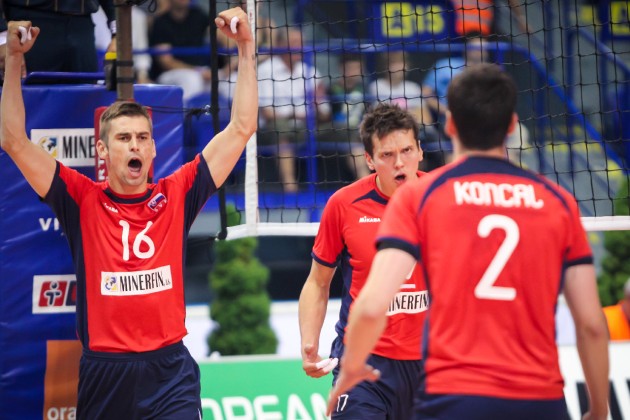 Slovakia needed a win to make sure the group will participate in the final round of the competition but the home heroes started very slowly trailing 2:8 in the opening set, so that head coach Stefan Chrtiansky quickly opted for some changes to his starting six but this did not help straight away. Actually Slovakia found its way back right before the final rush of the set going up 23:22 after the head coach’s son, Stefan jr., hit an ace, to be followed up by another winning service scored by Peter Kasper who sealed the final 25-23 for the home side.

Slovakia imposed its rule in set 2 going there for a comfortable 25-16 but Israel did not surrender, as the guests went up 16:11 in set 3 before Slovakia clawed back for the 22 all. However, right by the deciding moments, the local heroes made some mistakes and so Israel could pocket that section of the game with the score of 22-25. Slovakia promptly reacted in set 4 cruising quite rapidly to the final 25-19 thereby booking their ticket to the final four in Ankara.

“I think this was a nice game to watch for the fans and I am happy we played well especially as we had to score the most important points. Our initial goal in this edition of the European League was to qualify for the final four and I am happy we have achieved this with such a young group that is still lacking experience on international stage. We are looking forward to Ankara and we’ll be trying to play our best there” said Slovakia’s head coach Stefan Chrtiansky.

“We started well and did lead for most of the opening set but eventually Chrtiansky’s service was the factor that turned the tables around right before the end as he caused us a lot of problems. We went down after losing the opening set but Slovakia is a very good team and of course they wanted to play good in front of their fans. Still I am looking forward to the last match against Denmark on Sunday” stated Israel mentor Zohar Bar-Netzer.

IRI M: The Ranking Table of the...