WL: Kubiak” We won very important game”; Voronkov “We made too many errors”

Poland recorded another victory against Russia, defeating their Pool B opponents 3-2. This time, however, the home team had to work hard for the win, coming back from 1:2 and securing the victory only after a thrilling tiebreaker. 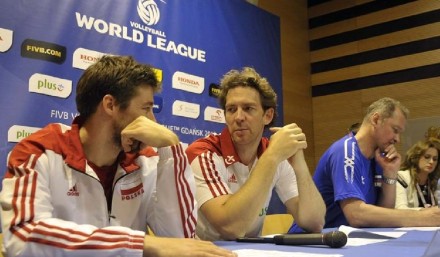 Andrey Ashev, team captain of Russia: Today’s game was much more interesting. We liked it much better and I think the fans can say the same. Details decided about the result. This is only the beginning of our season, we will train hard and show what we are capable of.

Michal Kubiak, team captain of Poland: We won a very important game. Even though the win came only after a tiebreaker, it’s an important victory and we’re very happy about it. I’d like to thank the fans, who packed the hall and supported us. We’ll see you in Czestochowa.

Andrey Voronkov, head coach of Russia: In the course of today’s match it was mainly the fourth set, when we made too many errors in blocking and reception, that decided about our loss. We tried to make up for that with better serving but it didn’t work out well. In the fifth set we got defeated by our own mistakes, which our opponents used well.

Stéphane Antiga, head coach of Poland: Today Russia played on a much better level than yesterday. I think three things were important: The fact they missed few serves in fifth set by forcing too much and that we could control our reception well, despite the quality of their serve. Secondly, just like the last year, three substitution players came to the court and were immediately ready to help the team – Buszek, Drzyzga and Nowakowski did a really good job. It’s a great satisfaction, because during the World Championship this was one of our strong points. It is something that must be present in the team: all the guys are ready to help. My role is to give them a chance as well as to keep them motivated and they know that. And the last point: tonight was a big test for Bartosz Kurek, and he passed it, did really well, making some kills at crucial moments. It’s not just about the result, the efficiency nor the 23 points scored in attack. It’s also the attitude, his behaviour. He was really aggressive on the court, he played and spiked in a way he wanted – that’s very positive.